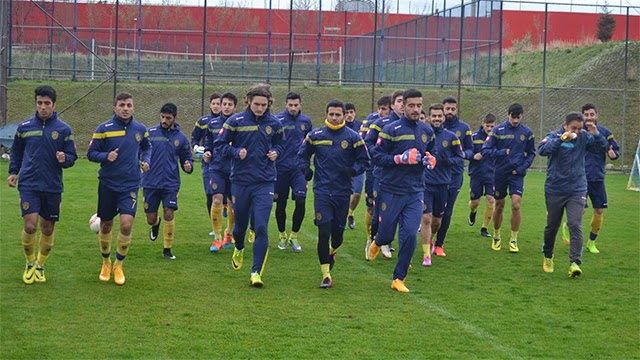 There are many big rivalries in Turkish football such as the Istanbul derbies, Goztepe vs Karsiyaka, Besiktas vs Bursaspor and Genclerbirligi vs Haceteppe (well not really). This weekend we have another fierce match as Ankaragucu travel to Izmir to take on title contenders Goztepe.

Unfortunately it looks like Ankaragucu fans won't be allowed to travel to the game due to fears of crowd trouble. The rivalry goes back to when Ankaragucu played Galatasaray in the Turkish cup final in Izmir. The local Goztepe fans went to the game supporting Galatasaray, where as the Karsiyaka fans were giving their support to Ankaragucu.

The last time the two sides met the game ended in a 1-1 draw at the 19 Mayis Stadium on Ankara with Levent Kale scoring a late penalty to give Ankaragucu a share of the points. Two former Ankaragucu players will be in contention for a starting place in the Goztepe line up. Emre Aygun and Mehmet Erdem both played for the club, with Mehmet moving to Goztepe in January after some fantastic performances for Ankaragucu.

Aytac Oden will miss out due to suspension so the central defence pairing will be Volkan Geyik and Gurkan Alver. Both Onur Atasayer and Cihan Bal are still long term casualties, while Gokhan Akkan is struggling with injury which could mean Turgut Kirveli could start in goal.

Timur Kosovali started the season so well for Goztepe but the goals have dried up for the big striker. He will be hoping to get the shooting boots back on and will still be a dangerous play for the Ankaragucu defence.

Ankaragucu have been in good form of late, and much of that is down to a new forward line of Hasan Ayarolglu, Hasan Kaya and Teoman Erkan. The 3 will need to be at their best on Sunday if Ankaragucu are to take anything from the game.

A bit of news from off field matters i received this week from former player Calvin Sosibo. The South African winger agreed to a deal with Ankaragucu to reduce the amount of money owed to him in unpaid wages. Unfortunately he has still not been paid by the club. The worrying thing is that the deal was struck by Mehmet Yiginer and he has failed to keep his promise.

In a week when the City of Ankara unveiled a statue of a transformer, surely their is enough money to save the cities most important club?
By Nady - April 03, 2015