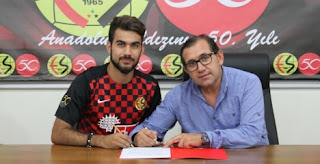 There were mixed news from the club today as Hasan Ayaroglu became the latest Ankaragucu youngster to win a move to the Turkish Super Lig as he signed for rivals Eskisehirspor. The player signs a 5 year contract but will move back to Ankaragucu for a 1 year loan period. It is unknown at this stage what the transfer fee involved will be.

As much as its disappointing for Ankaragucu and the fans to lose and exciting young talent like Hasan, its a good move for the player who will join former Ankaragucu players Aytac Oden, Kaan Kanak and Ozgur Cek at his new club.

The good news from today is that Mehmet Yiginer confirmed that the club will lift the transfer ban either later today or Monday at the latest. However after doing a bit of investigative work, the Turkish FA website today confirmed Omer Bozan as an Ankaragucu player on a 2 year contract. The former Hatayspor has been announced as the clubs first signing.