Three points. Thank you very much

Having lost their first two matches, sacked their coach and basically up Shit Creek Genclerbirligi were desperate for a win today and no matter how ugly it was, they will be celebrating tonight. 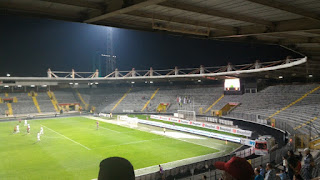 Little Oz, Dennis and myself joined a few rugby fans at the Red Lion to watch Wales defeat Ireland. A few beers and some food and it was then off to the stadium where Alex joined us. A half-decent sized crowd for us, especially considering that Passolig has pretty much decimated crowds in Turkey. For Kasimpasa though, as you can see from this pick taken during added time at the end of the match, there were about four fans, literally.

Gencler were pretty ordinary for the first half. Some really scary defending with our players not willing to actually commit to the tackle and then some equally rubbish high balls which the Kasimpasa big men at the back had absolutely no trouble in swatting away.

One of the big reasons that Baxter was sacked after last week's loss to Antalyaspor was the fact that he preferred playing Ferhat in goal instead of our new signing Hopf. Going by today's performance you would have to say that Cavcav was right. Hopf made a couple of brilliant reflex saves and also made two or three great saves deflecting the ball over the post or around the corner. Hopf had a great game.

That is something that can't be said of his opposing number. Poor old Isakson, A swedish international with 121 caps, didn't really have all that much to do. Most of what he was doing seemed compitent enough... until the 71st.

Gencler won a free kick about 30 yards out, Irfan tried to put it onto a forward's head but way overhit it. It sort of floated along and the Kasimpasa keeper flapped at it, letting it go straight through him and into the goal. Huge, Huge stuff up.


Here's Irfan Can Kahveci's goal for Genclerbirligi against Kasimpasa. Isaksson with a gaffe leading to a fluke goal. pic.twitter.com/zzfFmWdeKS
— Ata Dizdar (@ata_dizdar) August 29, 2015


We didn't care. We were ahead and for the next 20 minutes or so Kasimpasa tried but never really looked like scoring.

It wasn't great football (and the refereeing
is as shit as ever) but we got the three points. Good night Kasimpasa.

Some quotes from Naci Sensoy, our coach for the moment.

"Hopf gave a message to our defence: He said don't be scared, I'm behind you."