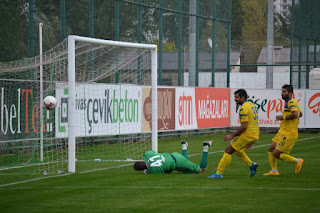 Ankaragucu are back in league action on Friday afternoon as they host Kartalspor in another must win match. Ankaragucu moved back into the playoff spots after a good 2-0 win at Sivas Belediyespor, while Kartalspor moved into the relegation zone after a 3-0 thumping at home to Keciorengucu.

As we have often seen, league positions don't decide outcomes of football matches with anyone capable of beating each other in this division. There were a lot of plus points from last weekends game in Sivas, especially the performances of Salih Sefercik, Mehmet Yildiz and Sertan Vardar. The experienced trio were the difference between the 2 sides and they will be looking to carry on in similar fashion against Kartalspor.

The key player for Kartalspor will be former Trabzonspor striker Murat Tosun who has scored 4 goals in the 5 games he has played this season. The Ankaragucu defence will need to be at their best as they look to make it 2 clean sheets in a row.

Ankaragucu coach Kemal Kilic will be relatively happy with his first two games having taken 4 points from a possible 6. Although Ankaragucu were impressive in short spells last weekend, there is no doubting they can perform a lot better, and they will need to if they are to become champions of this league.

The good news for Ankaragucu is that there aren't any outstanding teams in this league, unlike Altinordu a couple of seasons ago. If they team can put a winning run of games together, it will give them the confidence to push on to that all important title.

The Kanka group will be at the stadium again on Friday, for meeting details speak to Jim and he will give you the instructions.
By Nady - October 27, 2015