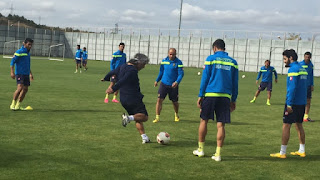 Ankaragucu take on Sivas Belediyespor tomorrow afternoon as they look to get their promotion campaign back on track. Having failed to win in their last 3 league games the Ankaragucu team has come under criticism from the media and fans which led to the dismissal of coach Aykan Atik.

New coach Kemal Kilic didn't have the best of starts last weekend as the team were held 1-1 at home against Gumushanespor. Its not just the results that have been disappointing, the performances have been unacceptable especially in attack. Strikers Mehmet Yildiz, Ermah Bozkurt, Timur Kosovali and Teoman Erkan have failed to score a goal between them all season.

Sivas are also on a poor run of form themselves after 2 successive defeats against Tokatspor and Keciorengucu. The newly promoted side will be looking to cause an upset in front of their own fans and Ankaragucu will need to up their performance if they are to return to the capital with 3 points.

Ankaragucu will be without key players Mustafa Ozturk and Adem Saglam through injury, while Gurkan Alver is suspended. Ferhat Odabasi and Timur Kosovali both suffered minor injuries in a car accident and will face late fitness tests tomorrow.

Hopefully this Ankaragucu team will turn up tomorrow and not serve us the utter garbage we have been fed of late. We need to start winning now!!
By Nady - October 23, 2015