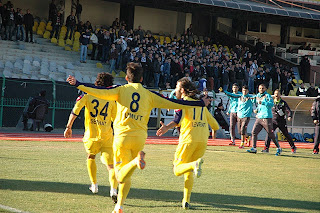 Three wins in a row and 3 cleans sheets as Ankaragucu came away from Altay today with the 3 points after a very disciplined and hard working 2-0 win. Fuat Aykuz has also maintained his undefeated start to his Ankaragucu career. There is no doubting that since he has come in he has shored up the defence. Players like Volkan Geyik and Aydin Toscali will need to up their game if they want back in the starting line up. Bayram Olgun kept his 3rd clean sheet in as many games since he was reinstated to the first team.

The manager brought Kaan Kanak back into the starting line up in place of Hasan Ayaroglu while Umut Nayir partnered Levent Kale up front as Harun Aydin was dropped to the bench. Altay is a difficult place for any team to go and win, a decent crowd at the Alsancak stadium and another good traveling support from Ankaragucu who again were praised for their behaviour.

The first half was a bit of a bore with neither Goalkeeper having much to do. The Ankaragucu defence looked solid and never gave anything away. Selim Teber moving to the back has made the difference, his experience and he can also play with the ball at his feet which is a big plus.

Both teams went in at half time level 0-0

Within minutes of the restart Ankaragucu had taken the lead, a good cross from the left was headed past the Goalkeeper by Serhat Gulpinar who sent the traveling support into wild celebrations. Still there was plenty time for Altay to come back into the match. The Ankaragucu team were having none of it, apart from a shot over by Mesut and a header by Mustafa which was straight into the arms of Bayram, Ankaragucu strolled through the rest of the game.

Ankaragucu made it 2-0 on the 64th minute through Leventowski The big striker got onto the end of a Kaan Kanak cross to head the ball into the top corner. Ankaragucu made many signings in the summer but Levent Kale has got to be the pick of them. His work rate is outstanding and he knows where the net is.

For the remainder of the match Ankaragucu were very comfortable with the home side never threatening. The home fans booed their players and even fought amongst themselves due to the anger of whats happening with their one time Super Lig club. Sounds familiar.