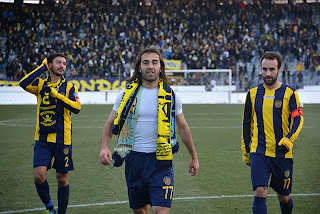 However, it could so easily have been 4, especially in the last 10 minutes when Ankaragucu battered the Iskenderun goal, and but for poor finishing from Mehmet and goalkeeper heroics it could even have been FIVE.

I arrived in the Stadium to be met by Boston Kanka Russell and then Cider Kanka John.    Battle Damaged Kanka was 'illness damaged' and couldn't make it.   We all hope he is back on his feet again soon.

Gecikondu was full (as always), Maraton was almost full and there were TWO lonely souls in the away end who were being kept company by two policemen !

It was a bitterly cold day after the snow yesterday and all that was missing was some Laphroaig to tip into our tea to warm our insides !

It was an edgy start for Ankaragucu with Iskenderun not content to play the sitting duck.   All end to end stuff and then the game exploded in the 15th minute with a disputed penalty for Ankaragucu.   Even though it was in our line of sight, we couldn't see exactly what the infringement was due to the crowded penaltly area, but I would guess that the referee saw a hand ball.

After 2 yellow cards and lots of protestation, Levent stepped up and coolly despatched the ball into the left corner.

Iskenderun didn't buckle and kept the pressure on, and to be perfectly honest, it was a relief when the referee blew for half time.

Ankaragucu was a wee bit fortunate to go in 1-0 up at half time.   Iskenderun had always looked dangerous in the final third and was giving as good as they got.

Into the 2nd half and Ankaragucu started more positively and I was impressed with their chasing and harrying.    Obviously the half time team talk had the desired effect !!

15 minutes into the 2nd half and the crucial goal arrived.   A great through ball down the centre for Levent to chase and he latched onto it, took it in his stride, and drove a great shot into the corner for the 2nd goal.

This was the signal for Ankaragucu to take control of the game and I was impressed with the way they were spreading the ball around and making Iskenderun chase the game.

The 3rd goal arrived on the 78th minute mark after a great passing movement which ended up with a low hard hit right wing cross which was tucked in by Umut with the goalkeeper helpless.

It was all Ankaragucu now with Mehmet missing two great chances to make it 4 and the Iskenderun goalkeeper making two great saves.

Final whistle and back to the Chopin to celebrate where we learned the great news that Alanya could only manage a draw today.    The pressure is ON now and the Ankaragucu players have made a statement of intent !

The show is back on the road again and Ankaragucu can go to Izmir next weekend full of confidence in their own ability to stick that round thingie in the back of the net yessssssssssssssss !!!

PS ......... Althought the whole team played well today, I forgot to mention that Metin was my Man of the Match for his 100% contribution in defence and attack.   His passing was excellent and I think we can say that we have found a gem of an attacking full back !