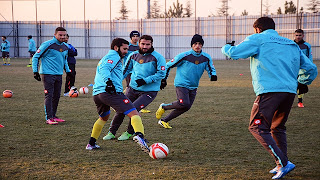 Ankaragucu host Bandirmaspor on Sunday at the 19 Mayis stadium in the last game before the winter break. Both teams have had a good first half of the season and are looking to close the gap on the leaders Altinordu and Alanyaspor. The last two times Ankaragucu have faced one of the leaders they have won 1 and lost 1 with the win coming against Altinordu and the defeat against Alanyaspor.

Last week was another good win for Ankaragucu as they won 2-0 at Altay and another clean sheet to make things even more impressive. Bandirmaspor are on a good run themselves having won their last two games against Altay and Kizilcahamamspor. Their start player is German born midfielder Tayfor Bingol who is also a former Genclerbirligi player.

The Ankaragucu team should be much the same as the last couple of games. Bayram will keep his place in goal, with Aytac and Selim set to be the central defence pairing. Up from Levent Kale will start but Umut Nayir picked up an injury so is doubtful. If Ankaragucu play to their full potential it should be another 3 points on the board. Going into the winter break with a minimum of 2 points off the leaders sets the team up nicely for the second half of the season.

The game will again be shown live on Baskent TV. Kick off time is 1330 Turkish time. The Kanka group will be attending the game as usual in their usual part of the stadium. Lets hope they are there to cheer on another win for Ankaragucu.
By Nady - December 20, 2013