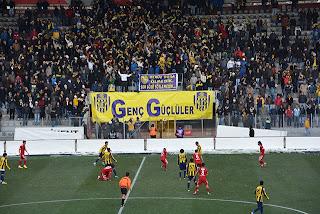 Tomorrows match will see Ankaragucu take on Altay in Izmir as they look to maintain their food form of late with another win. Like Ankaragucu the home side Altay who were the last Izmir club to play in the Super Lig have had tough times of late due to financial problems. This season so far Altay have had a start stop campaign. Last week they lost at home 3-1 against Bandirmaspor.

Altay have some good players in their side like top scorer Murat Uluc and Mustafa Cevahir. They sit just outside the playoff positions, but a win or possibly a draw could see them climb into a playoff place. A good crowd will be expected for tomorrows match between the two biggest clubs in Lig 2.

A good 3-0 win for Ankaragucu last week at home to Iskenderun will give them the confidence going into the match, another clean sheet will also lift the team. It will be interesting to see the starting line up with so many players fighting to get into the team. Emre Tasdemir has moved back into defence with Onur Atasayer and Mehmet Tasci both dropped to the bench. Hasan Ayaroglu continues to show inconsistency as does Kaan Kanak.

One player you have to give praise to is Bayram Olgun, he came under pressure from the fans after some poor performances last season, but he has showed loyalty to the club by signing a new contract, and also remained patient as he claimed back the number 1 jersey from Gokhan Akkan. In the two starts he has kept 2 clean sheets.

Tomorrows match will be another 1330 kick off Turkish time, last week i got the prediction spot on, this week I'm going for 1-1. Altay is a tough place to go to and with them raising there game for the arrival of Ankaragucu it could be a decent point.
By Nady - December 14, 2013