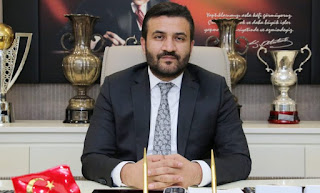 The day when Ankaragucu removed the transfer ban finally arrived as Fatih Mert announced tonight on his twitter account and also on the clubs official website. Alessio Cerci and Thomas Heurtaux both received their salary and the paperwork came through from Fifa today confirming the club is now free to sign new players.

Ankaragucu then announced at 19:10 the first new signing, followed by more new signings every 5 minutes much to the delight of the fans who had been waiting a long time for the good news to arrive. Before we look at the 9 new players in more detail, a big thank you and well done to Fatih Mert, Tamer Acar, Faruk Koca and the rest of the management team who have worked tirelessly to lift the ban which now allows Fuat Capa to prepare his team for the season ahead.

Luka Adzic - Young Serbian winger signed on loan from Anderlecht. Started his career with a lot of promise at Red Star Belgrade before his move to the Belgian side. Had a loan spell at Emmen in Holland and hasnt quite reached the heights of his early career. Will be looking to kick start it in Turkey and will provide competition on the left wing.

Sahverdi Cetin - Signed on a free transfer from Eintracht Frankfurt the 19 year old comes with a lot of promise and was also said to be attracting interest from Besiktas. Capped for the German National team at youth level, it looks like Ankaragucu could have unearthed a special talent. .

Atakan Cankaya - Signed on a free transfer from Osmanlispor. Another young Turkish player at 22 who plays as a defensive midfielder and is big and physical.

Mucahit Can Akcay - Hasnt lived up to his potential so far, but at 22 years old still has plenty of time to turn things around. Excellent technique and link up play, but needs to add more goals. Completes a free transfer move from Konyaspor.

Erdi Dikmen - One of the players of the season in Lig 1 last season with Keciorengucu. The big left footed centre back has a lot of potential and will be hoping he can develop and make the step up in the Super Lig.

Zvonimir Sarlija - As we announced yesterday, signed from Slaven Belupo for 350K Euros. The 23 year old centre back played under Fuat Capa at Kasimpasa last season.

Joseph Paintsil - The pick of the bunch on paper. Young winger from Ghana who had a successful spell in Hungary before moving to Genk in Belgium. Has struggled to get game time and another who Fuat Capa and Luc Nilis identified from the Belgian league. Has a lot of pace and skill which will cause a lot of problems for Super Lig defenders.

Jonathan Bolingi  - Congolese forward who also played in Belgium with Antwerp and also joins on loan. Can play out wide and Fuat Capa is hoping to use him the same way he did with Koita at Kasimpasa.

Assane Diousse El Hadji - Fatih Mert announced on TV tonight that Assane is coming to Ankara to sign with the club from St Etienne. The 22 year old defensive midfielder hasnt been able to hold down a regular place and spent some time in Italy with Empoli. An exciting player who will add that physical presence in midfield.

So 9 new signings today with more still to come. A creative midfielder and a striker will be priority for Fuat Capa. But today's signings will give him confidence going into Sundays match with Erzerumspor. We will have the match preview tomorrow!