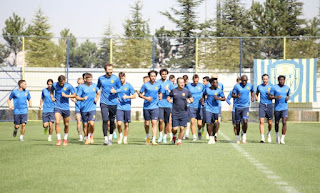 Even at this early stage of the season, Fridays match with Kayserispor is such an important match with Ankaragucu as they will be facing another team who will be fighting against relegation this season. The match will also see the return of prodigal son Ilhan Parlak who signed with his hometown team Kayserispor 2 weeks ago. Sadly for Ilhan it looks like the start of his Kayserispor career is much the same as his time at Ankaragucu, missing chances, overall poor play and coming in from criticism from the fans.

Ankaragucu should have a new striker in time for the match with Norwegian Torgeir Borven set to sign for the club later today in a 200,000 Euros deal. Borven will sign a 2+1 contract and comes with an impressive CV from his time in Norway, particularly Odd Boldklub.

Jonathan Bolingi looks set to miss the next 5 weeks due to a dislocated elbow which is a big blow for the player and club. Bolingi put in a positive performance last week at Sivas with his physical play and work rate and we wish him well with his recovery.

Fuat Capa will be hoping the team can show more quality in attack and need to find a way of utilising Adzic and Paintsil more. Both players have the potential to cause problems for defences in the Super Lig but Adzic needs to be involved more and Paintsil must work on his end product and start passing the ball earlier.

Defensively Ankaragucu looked solid and Erdi Dikmen slotted in nicely alongside Pazdan at centre back. Stelios Kitsiou put in his usual performance and has consistently been the teams start performer. Thiago Pinto was back to his best and even took the captains armband when Alper went off. Hopefully we see these performances more consistently.

Assane and Alper will have benefited from their starts last week and will only get better as they gain more fitness. Alper in particular will be a key player as he is the one with the responsibility from midfield in creating chances and adding goals.

Like Ankaragucu  and most other Turkish clubs, Kayserispor have had a high turnover of staff in the summer. The most notable departure is Bernard Mensah who has moved on loan to Besiktas. Incoming has saw former England International Aaron Lennon, Joseph Attamah from Basaksehir and French due Wilfried Kanka and Harrison Manzala from Angers. They are also trying to sign former Everton forward Oumar Niasse but looks like that one wont be in time for the weekend.

Kayserispor have 1 won and lost 2 of their opening 3 games. An opening win against Kasimpasa was followed up with a defeat at Alanyaspor and then a 3-1 home defeat against Erzerumspor last week who also beat Ankaragucu. That match in particular would have been a real disappointment for Kayseri and they will be looking to bounce back on Friday.

They will likely match up similar to Ankaragucu in a 4-2-3-1 formation with Ilhan playing just off Kanga. They will also be hoping that their new players are close to match fitness and start seeing more from Aaron Lennon.

Last seasons 2 matches between the clubs ended 1-1 and it will likely be a close event this time around. Lets hope Ankaragucu attack can improve on last week and give us all 3 points to kickstart our season!