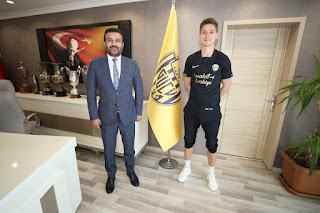 Ankaragucu this afternoon announced the signing of Rosenborg striker Torgeir Borven on a 2+1 contract for 200,000 Euros. The Striker had an excellent spell at Odd where he was top scorer before moving to Rosenborg. Thins didnt quite work out for him there as he found himself more often than not being played out of position in a more wide area of the pitch.

The 28 year old joined his new team today for training and the club will be hoping they receive his license through from the TFF in time for Fridays match with Kayserispor. Borven played 30 games for Odd in 2019 campaign scoring 21 goals before his move to Rosenborg. If he can recapture his form and is half succesfull as the last Norwegian striker to play in Turkey (Sorloth) he will do just fine!