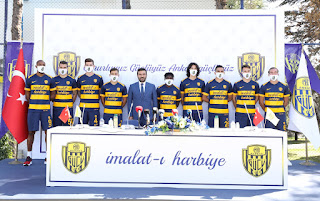 The long awaited return of the Turkish Super Lig is here and kicks off tonight as Rizespor host Fenerbahce in the season opener. But the weekends big game (well for Ankaragucu fans anyway), is Ankaragucu vs Erzerumspor.

The club unveiled 8 of the new signings today with Assane Diouse expected to join tonight as he flys in to Ankara. Its difficult to tell at the moment the level of quality these new additions will bring to Ankaragucu. Joseph Paintsil and Assane Diouse in particular should be very good signings who go straight into the starting line up and instantly improve the team.

The team are still looking to add another 3 players, an attacking midfielder, a Number 10 and a striker. Hopefully these players will arrive sooner rather than later. At the moment Fuat Capa only has Ilhan Parlak and Mucahit to chose from up front. And of all the midfielders we have we dont have a playmaker or someone who can score goals.

That said, the additions give Ankaragucu a much stronger chance of staying up this season than what we would have without them. It is going to take many years to rebuild Ankaragucu and fans need to look at the long term future instead of short term. No more transfer bans, no more paying stupid money for old players with injuries. Instead we need to sign young players with sell on value, and use our youth academy and give the players a path into the first team.

One of those Academy youngsters is Murat Sipahoglu who has signed his first professional contract today. The 18 year old has been training with the first team and impressed with his physical pressence and height. He will now provide competition for the other 4 centre backs we have and its encouraging to see the team looking at bringing more young players through.

The defence and Goalkeeper should pick itself on Sunday with Freidrich playing in goals. Then a back 4 of Kitsiou, Pazdan, Kulusic and Pinto. Both Sarlija and Dikmen will be putting Kulusic under pressure for his place in the team after a poor 2nd half of last season.

In midfield Lukasic will likely start in the more defensive position if Assane hasn't arrived in time and will likely partner Milos or Atakan. In the wide areas Paintsil will be a starter and the other place will be taken by either Saba or Adzic or Bolingi. I have a feeling Ilhan will start just behind Mucahit, not that i want to see this, but somehow Ilhan always finds a place in the team.

When you look at the team its clear to see where the weakness lies and thankfully the Ankaragucu management team have today confirmed those areas are where they want to strengthen.

Newly promoted Erzerumspor are the opponents this weekend and will provide tough opposition. They have also been busy this summer with 10 new signings so far including former Ankaragucu duo Kaan Kanak and Muhammed Gonulacar who was always a player i really rated. They have also added experienced players such as Mitchell Donald, Arturo Mina, Armando Sadiku and Fabien Farnolle.

With both sides signing many new players, its a match that could go either way and its going to take a while for the players to settle in and get up to match sharpness. From what i read on twitter, Erzerumspor have been unable to play any friendly fixtures, so hopefully Ankaragucu can take advantage of that and give Fuat Capa a win on his debut.