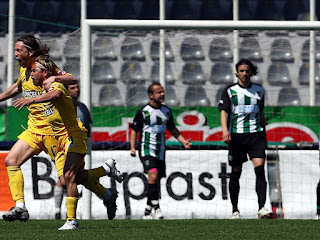 Two of Turkey's most historical and well supported teams go head to head this Sunday as Ankaragucu host Kocaelispor at Eryaman stadium. A 50 percent capacity will be allowed into the stadium as Turkey still has Covid restrictions in place. It will be a welcome bonus for Ankargucu having fans back in the stadium, especially some of the most loyal fans in Turkey.

Sadly for both of these clubs their fortunes over the last 10-15 years has been very similar with both suffering from poor management and financial problems off the pitch. Despite that they are still two of the most well supported clubs in Turkey with crowds of 25,000 - 30,000 in the lower leagues over the years.

Ankaragucu kicked off their campaign last Sunday and sadly our concerns became a reality. Faruk Koca stated in his first press conference that Ankaragucu now have the strongest management in history and one of the best managers in Turkey in Mustafa Dalci.

Here we are 1 week into the season and Ankaragucu have one of the oldest and most expensive teams in the Super Lig. A team full of slow players with many of them out of shape and just not good enough. But why would we expect anything different? This is the same transfer committee who oversaw the clubs signings the last two seasons when the team was relegated. We are still using Emre Yildiz as an agent despite all the poor signings recommended by him.

His star player Geraldo has now went 20 games with 0 goals or an assist in his Ankargucu career. Staggering for a forward player who continues to be picked. Thiago Pinto has been finished for a while now but he is on an expensive salary and his two backups Yasin and Mahmut Akkan are of Lig 3 standard.

Mert Topuz was Man of the Match against Alanyaspor on his debut last season. His reward? Being removed from the team for Akin and Bahidir Gungorgu both new signings that dont have the greatest of CVs. Why spend those salaries when we have a talented young Goalkeeper in the team?

Yusuf Abdioglu was someone i never liked as a player the first time he was here. Its reported that he has had his salary more than doubled to come and play for Ankaragucu which is quite incredible if true. His partner Sinan looked very slow and clumsy on Sunday and will need to improve quickly if Ankaragucu are to have any chance this season. The goal conceded against Tuzla at the weekend had the full back 4 at fault with Murat exposed at the back post too. Murat should never play at right back again, but our only option now is 37 year old Erdem Ozgenc.

Onto the midfield, Huseyin looks like he will be a good signing and worked really hard but needs to get his match fitness back. Abdullah you can tell has been a good football player but he is overweight, slow and 34 years old. Again the team have no natural Number 10 and that will be left to 35 year old Atif who is technically very good but again slow and no athletic ability. Mustafa Dalci again ignored Emre Eren who has been a standout in the Youth team. To not give the boy an opportunity when you have so many average players doesnt send the right message to Ankargucu academy players.

In the forward areas, Geraldo as we mentioned again was wasteful with any opportunities that came his way and Eren Derdiyok put in one of the worst striker performances i have ever seen. He spent most of the match walking around the pitch due to how unfit and slow he was. Cem worked hard and looks like he will be a good squad player.

Kwabena Owusu was the standout performer and looks like he will be an excellent signing for the club. He has pace and power but can also play too and capped off a great performance with a brilliant goal. Gboly Ayiribi should also be a good signing once he comes back from Covid.

Faruk Koca surprised everyone with hiring Mustafa Dalci as manager in the summer. He failed last season as manager so why hire him again? Faruk Koca is a control freak and for 2 years hid behind Fatih Mert as president. He is now doing the same with Dalci. Koca is making the big decisions and using Dalci as a puppet again. No other respected manager would work this way and Koca knows it.

Kocaelispor didnt get off to the best of starts themselves with a 3-0 home defeat against Umraniyespor. Former Ankargucu players Korcan Celikay and Atilla Turan made their debuts in that game and the team are managed by former Ankargucu manager Mustafa Resit Akcay.

They do however have some good players and Ankargucu should take no note of that scoreline. When the two sides met last season in the Cup Kocaelispor won at Eryaman with a weaker team than they have now.

Its a huge game for Mustafa Dalci as the pressure is already adding with how negative and unorganised the team look. Will the team deliver or will it be another disaster under this management?