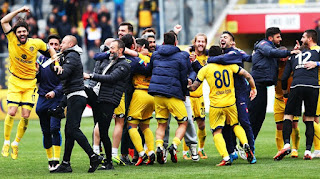 We are 4 days away from the opening week of the Turkish Lig 1 2021/22 season and we don't know if the match will be shown live due to Broadcasting rights, we don't know which players will be available for selection due to license issues, and the TFF have announced a ban on fans attending away matches due to Covid restrictions. Welcome to the chaotic world of Turkish Football which we all love and hate at the same time.

Some transfer news before we look ahead to Sundays match. Stelios Kitsiou has agreed to a 3 year deal with Gaziantep FK and will join former Ankaragucu team mate Torgeir Borven. We wish him all the best.

Ankaragucu are still waiting on the licenses being issued to Kwabena Owusu and Gboly Ayiribi for Sundays match. Both are said to be key players for the team this season and the club will be hoping they can be part of the squad that travels to Tuzla. Eren Derdiyok has been issued his license today and will be available for selection.

Last weekends match with Genclerbirligi was extremely disappointing and Ankaragucu fans will be hoping for a better performance this coming weekend. Most of the new signings failed to impress but both Murat Ucar and Cem Ekinci did show flashes of what they are capable off. With Owusu, Eren and Ariyibi still to come into the team, it will make Ankaragucu more competitive moving forward.

Tuzlaspor has some fantastic memories for Ankaragucu fans. Especially the match i attended back in 2017 at the 19 Mayis Stadium. Ankaragucu just needed the 3 points to guarantee promotion to Lig 1 but went down 1-0 with 9 minutes remaining. Two last minute goals from Enes and Kenan sent the 19 Mayis crowd wild and one of the best footballing memories i have ever experienced.

Tuzlaspor are looking to compete for promotion this season and have added players such as Lamine Diak, Marcus Pederson and Anil Basaran to their squad. Former Ankaragucu players Arif Morkaya and Emre Koyouncu are also part of their squad.

Its difficult to tell how far on the Tuzla squad will be in terms of fitness and preparation. Its difficult to believe they will be any worse off than the Ankaragucu team who have numerous players still out of shape.

Atif Chahechahoue is a player i have always liked since his days with Sivasspor and Fenerbahce. Hes 36 now and doesnt look in the best of shape looking at the training pictures. If Ankaragucu can get him fit he will still be an important player for the team.

Mustafa Dalci is already coming under pressure from the Ankaragucu fans for his negative approach to the game last week and failure to use any academy players. The likes of Atakan Dama, Ulas and Emre Eren in particular have all received excellent praise for their performances with the U19 team and in training. None of them were given an opportunity on Sunday and neither was Mert Topuz who was man of the match on his debut last game of last season.

Unless something happens in the next couple of days, Ankaragucu are going into Sundays match with only 1 striker. Eren Derdiyok who is a while away from match fitness. It raises more concerns about the recruitment team and failure to identify players for key positions.

Hopefully TRT Spor announce in the next couple of days that they have the broadcasting rights for Lig 1 and we can watch the games live. Either way we will keep you posted and have some sort of report on Sunday night. Haydi Baskent!!