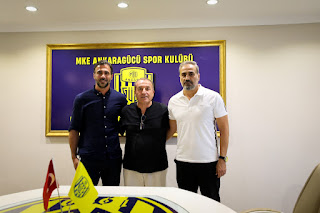 Ankaragücü this afternoon appointed Omer Erdogan as new manager on a 1+1 year contract. The club moved swiftly for their number 1 target after Mustafa Dalci handed his resignation in after Saturdays 4-1 defeat at Karagumruk.

Erdogan is a popular choice with the Ankaragücü fans who see him as a modern thinking coach who had his former side Hatayspor playing some of the most exciting football in Turkey. It is believed the club have agreed to allow Erdogan to sign some of his own players over the next week before the transfer deadline day.

I remember Erdogan from his time as a player at Bursaspor and when I met Ally McCoist he spoke very highly of him when Rangers were facing Bursa in Europe.

The appointment of Erdogan was met with positive reaction by the fans, but the decision to still have Emre Yildiz at the club and in the photos when he was paraded have been met with anger and backlash. The fans have made their feelings known that they won’t rest until he is gone!