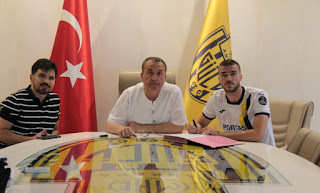 Ankaragucu have been searching the whole summer for a centre back and finally got their man as the club agreed a 500K Euro deal with FK Sarajevo for 24 year old Nihad Mujakic. The Bosnian was announced last night and has already trained with his new team mates.

The move is a bit of a gamble for Ankaragucu who spoke of signing a Central Defender of quality from one of the top leagues. Instead they have signed a player who has played under 50 games in last 3 seasons and spent most of his time in the Bosnian league with Sarajevo and a failed move to Belgian side Kortrijk.

That said, on the positive side he does look like he has a lot of speed which is important in the Super Lig and also good on the ball. The main questions will be can he defend? How does he read the game? And whats his positional sense like? I guess we will need to wait and see.

Nihad has singed a 4 year deal with the club and we wish him all the success with Ankaragucu!