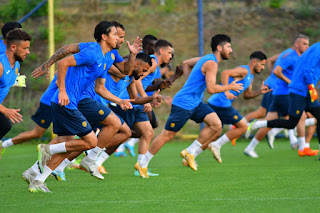 Ankaragucu travel to Hatay this weekend as they take on Gaziantep on Sunday night which will be another tough game. The game was moved to Hatay due to the condition of the pitch in Gaziantep.

On Monday night Ankaragucu got their league campaign underway with a good performance and 0-0 draw at home against Konyaspor who are further on in terms of fitness due to their participation in the Europa League. Although happy with the share of the points, Ankaragucu could very easily have taken all 3 if they had taken the chances that came their way.

The team will likely be the same that started against Konya with Bahadir in goal who kept a clean sheet. In defence Atakan will partner Nihad while Oguz and Marlon take the wing back positions. The main concern from the defence was the lack of height at set pieces. Sinan could be an option but his lack of pace will likely see him on the bench.

The midfield trio of Abdullah, Zahid and Pedrinho all impressed and will likely start with Tasos and Beridze on the wings. The later 2 were guilty of missing chances and will be hoping to take any that come their way at the weekend.

Up front Macheda linked play well but never looked like scoring at any point. While Ali Sowe still looks a fair bit behind in his fitness so will likely see the Italian start.

Mustafa Dalci said its too early for Jese to start games due to his fitness levels and a knock he took in pre season. Once he is up to speed we should see him starting more games.

Gaziantep will be tough opposition and the key man will be the brilliant Alexandru Maxim who scored 15 goals from midfield in his first season and 15 in his second season. He also provided 7 assists last season too. Technically excellent who is also a danger from set pieces. He has already opened his campaign with a goal last week in the 1-1 draw against Sivasspor.

Gaziantep won both games the last time the sides met in Super Lig 2 seasons ago with a 2-0 win at home and a 1-0 win in Ankara. Ankaragucu will be hoping for an improvement on those results but will need an even bigger performance than last weeks to take anything back to the capital.

Former Ankaragucu duo Stelios Kitsiou and Torgeir Borven will be amongst the squad for Gaziantep, while Oguz Ceylan will be up against his former employers with a point to prove.

In other news, Atakan Dama was selected to go and play for the Turkey U19 National team. We wish him all the best.