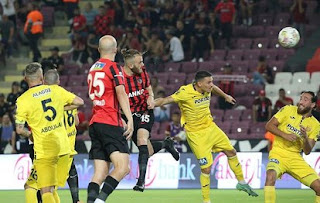 The only positive and player who came away with pass marks for Ankaragücü was Bahadir who made multiple saves which tells you everything you need to know about tonight’s performance.

Mustafa Dalci went with the same team as last week that drew 0-0 at home against Konyaspor. It was clear in the early stages of the match Gaziantep we’re going to press Ankaragücü making sure Pedrinho and Zahid got no time on the ball.

Abdullah was the biggest problem in midfield as the speed of the game was too much for him. His fitness and lack of speed have been a problem I have mentioned most of last season.

The first chance of the game came in the 6th minute when Zahid and Beridze linked up to set up Pedrinho who shot with the outside of his foot from outside the box but the ball went inches wide.

Five minutes later Furkan dragged his shot wide at the other end after good play from the main man Maxim.

A few minutes later Gaziantep should have taken the lead but Maxim hit the side netting after Markovic cut the ball back. Maxim went even closer next as his free kick went inches wide of the post.

On the 35th minute Bahadir made a great save from a Marko header and it would be the first of many from the Ankaragücü keeper.

Two minutes later former Ankaragücü defender Kitsiou went close but Bahadir made a good save to keep the score level at half time.

Within minutes of the restart Gaziantep we’re in front. We spoke about how vulnerable Ankaragücü look at set pieces and it showed again. Maxim crossed the ball for Ertugrul who rose above 2 Ankaragücü defenders to head past Bahadir and make it 1-0.

They almost doubled their lead as Figueiredo was put through on goal but dragged his shot wide of the post. He had another chance 8 minutes later but Bahadir made another good save.

Bahadir was called into action again on the 71st minute when Macheda gave the ball away cheaply. The ball was sent into the box for Figueiredo but again he was denied by the Ankaragücü keeper.

Stelios Kitsiou had the ball in the net but it was ruled out for offside after the referee checked with VAR to the relief of Ankaragücü.

Bahadir made another double save with minutes to go and if it wasn’t for his performance Gaziantep would have won comfortably.

Jesé had a chance at the end for Ankaragücü but his shot was poor and went wide after a cut back from Ali Sowe.

A poor overall performance from Ankaragücü and the concerns we spoke of in defence and attack are evident. Atakan and Nihad look like bombscare and Oguz at right back looks like Lig 1 standard.

In attack Tasos has been very poor in both games in terms of shooting, crossing and passing. All basics in which is needed for a winger. Beridze needs time but again not impressed with early showings. Macheda and Ali Sowe look like they could play for months and not score but a lot of that is not their fault as they are having to do most of their work outside the box.

Next up is Faith Karagumruk next Sunday in Istanbul!