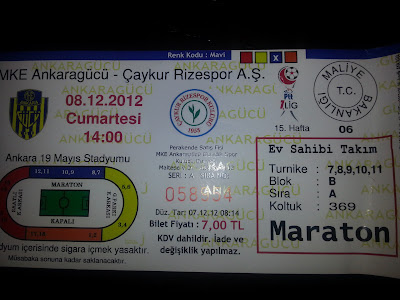 I had just had lunch with my wife and in-laws, and it was now time to head to the stadium for what was hopefully not going to be another loss. I hailed a cab, and all was going well until we hit Ataturk Blvd. where the traffic was backed up.

By the time we reached the stadium I realized I was going to miss the beginning of the match. So I hurried to the ticket both where upon arriving some middle-aged, bearded fan in a panic pushed ahead of me in line and then scampered off with his ticket in one hand and his piece of cardboard (to cover the dirty seats) in the other.

I got my ticket and sprinted for the gate, passing my bearded friend along the way. As I went through the turnstile, I worried about two things: one, that the police doing the pat down would take my pen off me, and the other was that when I emerged from the short tunnel that I would look up and see that Rize had already scored.

Both of my worries were unfounded, and when I looked up and read the scoreboard a huge smile spread across my face. Not only were we not down, but we had actually scored in the first five minutes of the match. I quickly learned from one of my fellow fans that our midfielder Bilal had scored the goal off one hell of a throw in from 25 Gurkan.


As soon as I found my seat, I messaged Eski Kanka Jim (who was stuck at work) with the good news. His response was "make it two."

Easier said than done. Not that Rize were really threatening in any way. Weakened by the absence of their two dangermen Kalu and Jallow, every shot they took was off target, and our defense was as thirsty as Eski Kanka Jim with a bottle of Efes in front of him. Our captain Ümit Kurt in particular was soaking up everything that came his way. With his imposing frame he seemed to win every ball in the air and  was consistently able to muscle the ball away  from Rize on the ground. My vote for man of the match.

A hard decision though because a number of our other players were also superb. 07 Kaan Kanak caught my attention when he somehow managed to insert himself between the ball and the attacking player to which it was seemingly attached. He then proceeded to wrestle it away and clear it from our half all without even the hint of a foul. He sustained this level of play for all ninety minutes.

And then there was 10 Timur who appeared to be everywhere. His speed and endurence are impressive even if nothing concrete came of it in the first half which ended with the same 1-0 score that I had seen when entering.

During halftime, some of the young fans in one of the groups sitting in Marathon climbed behind the uppermost seats and mocked the Rize (which is lies on the Black Sea Coast) fans with their imitations of Black Sea dancing and hollering.

Apparently, some of the slightly less juvenile AG fans in their group took offense at this antagonizing of our opponents' fan groups Rotasızlar and Mekansızlar, though, and told them to come down and rejoin the group. When they didn't respond immediately and showed a bit of a rebellious streak, their slightly older mates lost their patience and came up after them. The kids quickly dispersed and then rejoined their group.


The second half nearly began with an AG goal the way the first half had. 09 Sinan received a cross right in front of the goal but fumbled it. Then there was a great run by Timur who passed to 14 Erdogan whose shot was taken down by Rize keeper David Loria, formerly of the Kazak national team.

And then finally it happened. Ankaragucu made Eski Kanka Jim's words so. Gokhan Erdogan received a pass in the AG half and then proceeded to make a gorgeous run up the left side of the pitch. When Rize's 12 Hassan finally came to block his way at the top of the box, Erdogan cut right ala David Villa and launched a rocket into the upper right hand corner of the goal well beyond Loria's reach.

Rize were now desperate to make something happen, but AG managed to diffuse their attack until Rize were granted a free kick in extra time. 04 Fahri managed to place it in the upper-left-hand-corner just beyond Bayram's reach, and the score was now 2-1. Rize had a minute or so to equalize. Ankaragucu were not about to let that happen though, and a minute later there was great rejoicing both on the pitch, in the stands, 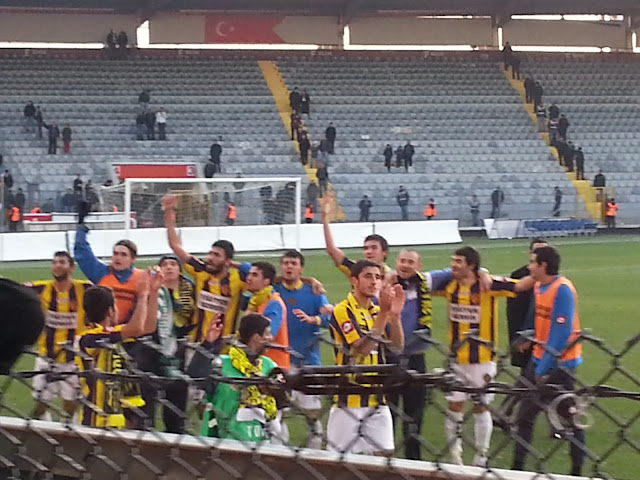 and in the Chopin bar where Eski Kanka Jim was waiting to celebrate.