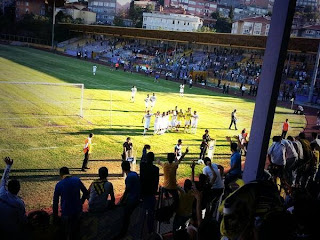 Ankaragucu travelled to Istanbul what should have been an away match, but just over 750 Ankaragucu fans made the trip which made the Eyup Stadi more of a home match with there been more Ankaragucu fans at the game than Eyup fans. After last weeks disappointing home defeat against Gungorenspor the club wanted to put things right as they took on the Istanbul side.

So returning to the team was Turkish youth Internationals Gokhan Akkan, Emre Tasdemir and Hasan Ayaroglu. There were also full debuts for Selim Teber and Mehmet Cakir. And what a difference the changes made to the team.

It took only 5 minutes for Ankaragucu to take the lead, and it was Umut Nayir who put them 1-0 up. The young striker had an off day last week, but showed today that if you give him service he will score.

Emre Tasdemir made it 2-0 Ankaragucu on 38 minutes with his first goal for the club. Taking the place of Mehmet Tasci who was away on International duty with the Turkish U23 team, Emre certainly stepped up the the challenge.

Four minutes later and it was 3-0 Ankargucu as Umut Nayir scored his second of the game and then Hasan Ayaroglu scored to make it 4-0 just before half time.

Ankaragucu lead 4-0 at half time, i couldnt even tell you the last time those words were mentioned.

Into the second half and they didn't let up, as goals from Hasan Ayaroglu and Mehmet Cakir gave Ankaragucu a fantastic 6-0 victory. Serkan Sirin, Teoman Erkan and Hurkal Eren Turan all came on as subs in the second half. The Ankaragucu support were delighted with the teams performance and can look forward to a pleasant journey home to the capital.

What a difference a week makes, Hayati Soldas will have eased the early pressure with todays result, but next week Ankaragucu face Diyarbakir BB and will need to build upon todays result. A great weekend for the Kankas as we have something to celebrate at last.
By Nady - September 15, 2013