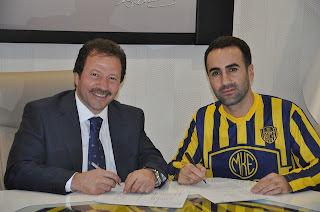 Ankaragucu have pulled off a major signing by agreeing a 2 year contract with Mehmet Cakir. The player who played for the club 3 years ago after signing from Ankaraspor has been out of favour at Elazigspor. President Mehmet Yiginer confirmed the deal on twitter and the club are also expected to sign Polatli forward Ferhat Dumas.

Ankaragucu earlier confirmed the signatures of Ibrahim Sahin and Serhat Gulpinar, and that takes the signings to 5 with Selim Teber and Aydin Toscali already having signed. Well done President Yiginer !
By Nady - September 05, 2013