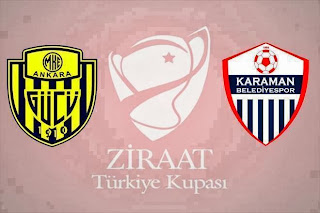 Ankaragucu will host Karaman Belediyespor at home in the Turkish Cup second round on Wednesday.  It will give the club the opportunity to play some of the fringe players but Karaman must be respected if Ankaragucu want to progress into the next round. Last season Ankaragucu had a good cup run only to be knocked out against Besiktas 3-2 after taking the lead.

It was difficult to find out much about the opponents Karaman, other than them being an Amateur side who knocked out Kayseri Sekerspor in the last round there wasnt much more that i could add. Im sure Karaman is located just outside Ankara but maybe our Ankara residents can confirm this ?

Ankaragucu go into the game on good form after winning their last two league games against Eyupspor and Diyarbakir BB at the weekend. Hayati Soldas has played with an attacking formation with Emre Tasdemir, Mehmet Cakir and Hasan Ayaroglu all supporting Umut Nayir in attack. There is no doubting the role that Mehmet Cakir is playing for the club with his experience bringing out the best in the youngsters around him.

The game will again be shown live on Baskent TV at 3pm Turkish time. All the latest updates will be on The Round Ball in Ankara facebook page.