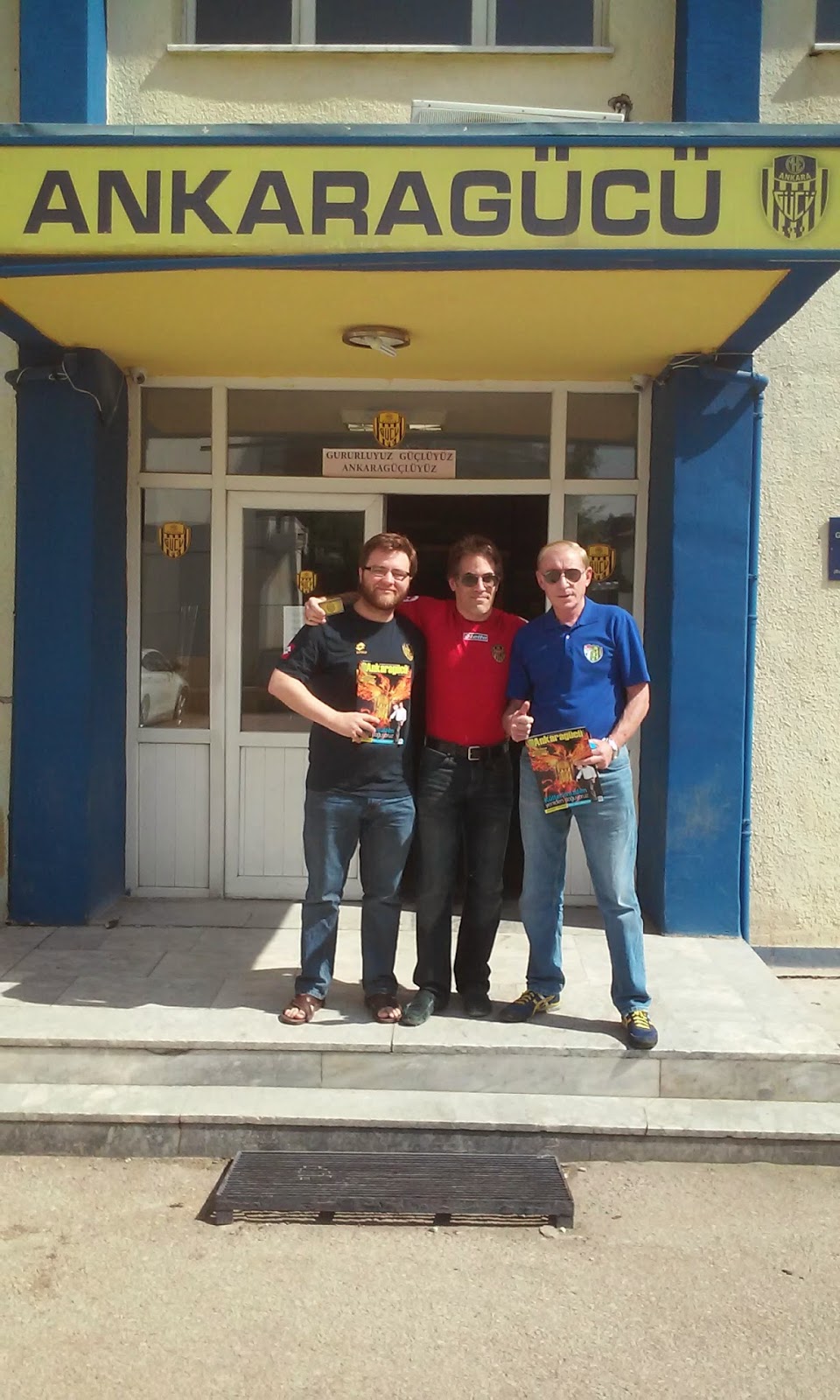 Apart from the last 10 minutes of the match, this was one of the most boring matches I have ever witnessed and it never really ignited until Levent came on to a standing ovation in the 80th minute.    We can wonder why Levent did not come on sooner, but the fact that he didn’t warm-up with the rest of the team pre-match should give a clue to his lack of fitness or perhaps he is still in recovery mode from his injury last season.

The Kankas met-up at The Chopin Bar for pre-match ‘refreshments’ – Cider Kanka John, Paddy Kanka Paul, Ahmet Bey, yours truly, and we met Apple Kanka Erman inside the Stadium.

Not the attendance I expected for the 1st home match of the season with Maraton only half full, Kapali barely a quarter full and about 100 in the away end who tried unsuccessfully to make themselves heard.   A full Gecikondu put paid to that idea !

With Levent on the bench, it was left to Umut to play The Lone Ranger with all of his knock-downs and foraging coming to nothing.   Consequently, most of the play was in midfield with both teams cancelling each other out and getting in each others way.   You coulld say they were like headless chickens !
It took until the 32nd minute for the first genuine chance of the match when an Ankaragucu attack down the right produced a right wing cross which was scuffed past the post.

So the half time whistle came as a welcome relief and the only excitement I had experienced at this stage of the match was the sight of the introduction of the new swish double turnstiles at the old Gate 7 and 8 which have been re-numbered 11, 12, 13 and 14.   Snake like queues may now be consigned to history ?!

The 2nd half opened up with more purpose from both teams and the first chance came to Umut 5 minutes in.   A break down the left and the early cross, but Umut couldn’t direct his header downwards and the ball subsequently sailed over the bar.

2 minutes later at the other end it was almost Inegol taking the lead when Gokhan palmed the ball out at the edge of the box from a cross.   However, the ball only landed at the feet of an Inegol attacker who sent the ball past the stranded Gokhan for a certain goal.   Fortunately, there was an Ankaragucu defender (couldn’t see who) guarding the goal line and he hoofed the ball clear.   Phew !   Close call !

Inegol’s 2nd chance of the match arrived 8 minutes later when they broke away down the left and as the attacker approached the goal line he made to shoot but was felled by an Ankaragucu defender.   The referee was well positioned and pointed immediately for a penalty.   The penalty was placed to Gokhan’s right and was on target, but he guessed correct to make a great save at full stretch.

The match then resumed its midfield mediocrity until the 80th minute when fans favourite Levent came on, but despite some feverish attacking, Ankaragucu couldn’t make the breakthrough.

So, in the final analysis, it wasn’t enough in the 2nd half from Ankaragucu.   However, if they continue to play next week where they left off last night, then we can still be optimistic of picking up 3 points in Sariyer.

Back to The Chopin Bar we went to watch the Germany v Scotland match, but that’s another story !