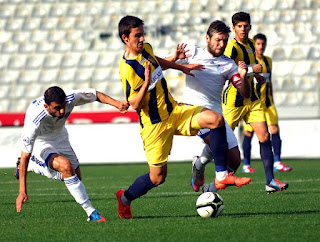 Picture above taken from Amatorunsesi


Today should have been a close game between two teams struggling at the bottom of the Turkish First division. Instead one team turned up and the other didn't and unfortunately for us it was Ankaragucu who didn't turn up. There is a growing concern of late that Ankaragucu are conceding to many goals and not finishing their chances and today was no different.


Bayram Olgun came into replace Gokhan after returning from injury, Aytac moved into midfield to replace the injured Mert Erdogan and Orhan came in at right back. It was a nice sunny day in Ankara and around 8,000 fans turned up to watch the game.

The first real chance of the game fell for Ankaragucu when Orhan Evci shot was well saved from Onur Bulut. Seconds later Ankaragucu were awarded a penalty, up stepped captain for the day Umit Kurt who sent Onur the wrong way to make it 1-0 Ankaragucu.

Then came what can only be described as the worst Ankaragucu have played since I've been a supporter. Instead of keeping it tight at the back and having some organisation, the defence fell apart and Gaziantep made Ankaragucu pay the price. First up the defence failed to clear the ball in the box, it eventually found its way to Eren Ozen who smashed the ball into the top corner to make it 1-1.

Two minutes later and it was 2-1, Volkan slipped at the back which allowed Gaziantep in, a lovely ball into the back post, the ball was then played across the face of goal which Serdar got onto the end of and made it 2-1. A few minutes later from a corner Bayram failed to deal with the cross, the ball found its way to Serdar again, and the striker smashed the ball through crowded bodies into the back of the net to make it 3-1.

Ankaragucu made a change and brought Gokhan Erdogan on for Orhan Evci. Ankaragucu failed to test Onur for the rest of the half as the teams went in at 3-1 Gaziantep BB. At half time Kaan Kanak came on for Umut Nayir.

Into the second half and it was a better performance from Ankaragucu. A couple of things that have to be noted, the first being the incredible support the Ankaragucu fans showed today, even when 3-1 down they still made a fantastic atmosphere and got behind the players. The other is the amount of space our fullbacks give the opposition, this is something Yilmaz needs to address quick or we will continue to concede goals.

Ankaragucu had a couple of good chances in the second half, the first a golden chance for Timur. The striker got onto the end of a long ball, Onur made a mistake in goal for Gaziantep which left and empty net for Timur, but the striker somehow missed as he hit the crossbar.

Gaziantep had a couple of chances of their own as the Ankaragucu defence continued to gift them chances due to silly mistakes. That man Serdar got his hat trick late on as he took the ball past Mehmet Tasci before a lovely finish into the back of the net to make it 4-1. Timur had another chance but again failed to hit the target.

Sinan came on for Hasan who had a disappointing game late on and had a good chance but failed to connect with the ball. Next up is a midweek game in the Turkish Cup at home to Corum. If we play the way we did today there could be a big shock on the cards. 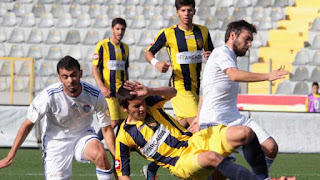 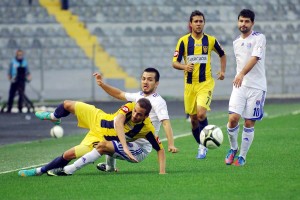