What a match. A great crowd, plenty of goals, some great individual work. All that and just a draw, which was probably the right result.

The wonderful autumn weather continues in Ankara and conditions were excellent on Friday night for a good game of football.

Regulars Spine and myself were joined by Little Oz Kanka and his mate Tom and also by Bernard and his mate Jan. Bernard doesn't go too regularly to the football but his history of going to matches certainly stretches well before me. To give you an idea, his first match in Ankara was at the 19 Mayis "sans roof". 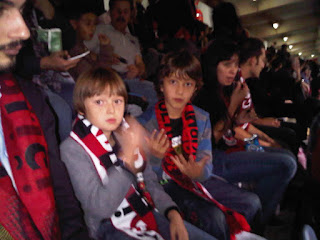 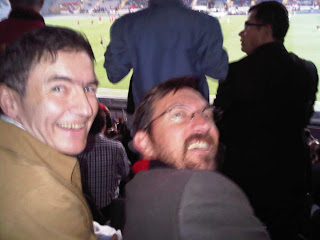 Kofte and refreshments and off to the stadium early. Despite the fact that the tickets were 100tl for Maraton (season tickets cost us the same amount) a big crowd was in for 3rd v 1st. A win for Gencler would have put us top of the table, if only for one day, and hopes were high for both sets of fans.

We even had some entertainment before kick-off with Ais Ezhel singing the kirmizi kara song on the sidelines. Even so, I much prefer rocking up to matches five minutes before kick-off.

Enough grumbling and onto the match and Gencler came  out nicely. No real shots though and it wasn't long before Galatasaray started to dominate possession. We seemed to be holding off them but at the same time though Galatasaray couldn't get much past the defence.

Galatasaray seemed to be on top but we were still in it and then in the 26th Tosic went down the left wing and somehow or other beat his man sent it in to Azofeifa on the edge of the box and the Costa Rican hit it into the far corner with the outstretched Galatasaray goalkeeper having no chance.

Galatasray stepped up a gear but simply couldn't sort themselves out. Our conversations at half-time were all along the same line... the Galata players are getting frustrated and angry.

Second half though was another matter as Galatasaray upped the tempo yet again. And so it was no surprise when they equalised in the 54th. Then a punch to the guts as they scored again just four minutes later.

Oh well. We had tried.

As a kerfuffle was occurring to our left with a bunch of Gencler fans trying to get security to do their job and kick a Galatasaray fan out of our section, we managed to equalise. Azofeifa took a quick free kick sending it to Hursut, who had an excellent game embarrassing the Galata defenders, sort of lobbed it in near the far post where Aykut went sliding in to score.

Screams and shouts and one minute later we were back on our feet (we hadn't sat down actually). Someone had a shot, saved by the keeper, but the ball went out Jimmy Durmuz who had his go, the ball then took a huge deflection off a Galata player and was in. 3-2 up and the Galata fan near us was escorted out with half of Maraton shouting at him.

Attack, attack, attack from Galatasaray and then finally they got back. I'm not sure who the Galata players involved were but Ramazan made a back mistake when he punched out a ball when he should have held on to it or sent it over the bar. In the end the ball went straight to an opposition player and from there into the back of the net.

A horrible feeling but all up I'd say the result was a fair one. A win would have been brilliant but a draw ain't bad at all.