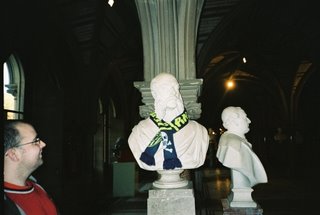 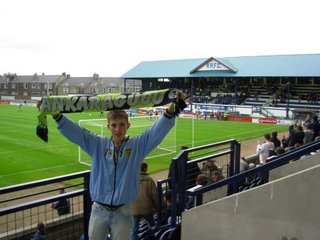 Kirkcaldy Kanka Martyn is clearing suffering from Ankaragucu-withdrawal. He has been trying to treat this terrible condition by heading off to matches in Liverpool but somehow I don't think it is working. Kirkaldy Kanka takes over:

I went with Sinead to Everton v Wigan. As we arrived at the stadium we stood watching a police horse trotting in the middle of a narrow side road. We were transfixed as we hadn't seen a horse at a match in a while. Not sure Sinead ever had.

We were slightly on the road ourselves when I noticed the horse shitting. And not normal shit, like very milky weetabix. I pulled Sinead onto the pavement, obviously in the belief that if a pedestrian is on the pavement, he is safe. There was a man selling raffle tickets ahead of the horse in the middle of the road. He was wearing a nice pair of cream trousers. We noticed the horse shit rebound off the road and spray on the man's trousers. The man swore in disbelief at the horse. The horse was unaffected by this and continued to relieve itself.

Myself and Sinead were laughing at this unfortunate man, when I noticed Sinead's jeans had an interesting pattern on them. When I pointed this out it was her turn to give the horse abuse. I was still laughing when I looked at my own jeans.

Still had to laugh though. My jeans were not too bad, Sinead's were worse. The other guy was a mess, and it really served him right for wearing cream trousers.

We sat way back in the old stand for the game. Probably just as well considering the fumes we were unleashing. 2-2. Good game. We were impressed with Andrew Johnson.

I went back last weekend to watch Everton v Manchester City. This time I had a good seat behind the goals. The stadium is impressive. Inside the stand they actually serve beer before kick off and at half time. You can't take it to your seat, but it is an improvement from sunflower seeds. There are video screens showing previous games both in the corners of the stadium and inside the stands.

Quite a good game this one. Everton scored on the stroke of half-time and looked to be heading for a victory. In the 93rd minute however, City equalised. 1-1. Can't say I was upset. All the more exciting really. I'm at that stage of not really caring about the result, just wanting to see things happen. And I certainly saw something different next.

After the game the City keeper and Joey Barton went to the away fans. Barton is hated by Everton fans. He's actualy from Huyton in Liverpool. He punched an Everton fan in Thailand on an away tour with City, and was sent home. His step brother was charged with murder. The Everton fans had reminded him of this during the game. At the end he gave his shirt to a disabled City fan. Then he walked past our stand and mouthed off at the Everton fans, who were mouthing off at him. Barton then dropped his shorts and flashed his ass at us.

As I left the stadium I passed some Everton supporters who were complaining about this to the police. Barton will find out today if he will be charged by the police or suspended by the FA. The media seem to be making light of the incident.

Another thing I should mention is the Galatasaray Liverpool game. Since I live less than 1 minute walk from Anfield, I was hoping to get tickets. But Anfield is always sold out. I must look for ticket touts.

It is a terrible feeling to hear all the noise of a match inside your own house, and not be able to go. Even more so on this day. From the afternoon I could hear Turkish football chants. Since these rarely change much, I recognised all of them. And it hit my old heart. Everywhere in the house I could not escape them. It was in my toilet that I decided that enough was enough.

For the Kankas I was setting out in full Maniac Kanka sponsered Ankaragucu gear. I walked around the stadium getting funny looks from Liverpool fans. Then I saw a group of Turks heading to a kebap shop. They never looked at me. A part of me felt relieved, what was I doing? And then ahead I saw the travelling suport. Maybe 100 of them dressed in Galatastaray gear. For Gucu, I decided to walk right through them and their drums. They looked me up and down, and parted to let me through. The songs stopped, and I was allowed to pass. Most were dressed in Galatasaray gear, but a couple had Fenerbahce tops and one had a Malatyaspor top on. It was also red and yellow stripes.

I knew when I saw the Fener tops that I was safe. Many of those supporters were no doubt living in England. That would explain the lack of diverse songs. I got a few funny looks as I walked up the street in my gear, and even more ones as I opened my front door. An Ankaragucu fan, living in Anfield road?! Some Turks shouted at me before I pulled the door shut, 'Ankaragucu mu?' I turned and sang at them. 'En buyuk baskent!' Amoung other things. They smiled and gave me the thumbs up. They had seen something they never expected to see on Anfield Road, I had been reminded of something I missed.

PHOTOCAPTIONS: The picture of the statue is from Manchester Town Hall. The other photo is of my nephew Paul who went to the Battle of Kayseri. This is him at Raith Rovers in the League Cup 2-1 defeat to Airdrie United.
By Oz Kanka - October 04, 2006