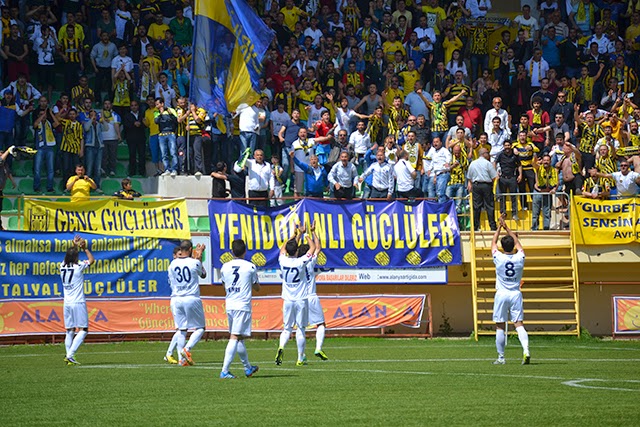 Finally, Finally, Finally the Ankaragucu team arrived and showed exactly what we knew they were capable of with a stunning 5-1 win at Alanyaspor in new Coach Celal Kibrizli first game in charge !

So the new coach made a number of changes to the team, and there were even places on the bench for Mehmet Cakir and Aydin Toscali who were supposed to have had their contracts terminated. The first noticeable change was that as i predicted midweek, he moved Emre Tasdemir into a further forward role and young Onur Atasayer came back in at left back.

Celal bey showed that he isn't just going to settle for defensive performances in away games against the leagues stronger sides. He played to our own strengths and played both Umut and Levent up top. And guess what ? We produced our best performance of the season. Well done to our new coach !!

The problem with Ankaragucu this season, has been the poor choice of coaches who haven't played to our own strengths and instead gave to much respect to the other teams. Can Ankaragucu now build on this at the perfect time with the playoffs coming up ?

Things didn't start to well with Emre Akbaba giving Alanyaspor the lead after 14 minutes. I actually said to Damon here we go again another poor performance coming up against one of the stronger sides. How wrong was i not to show any faith in our new coach ?

The equaliser came after 29 minutes through Kaan Kanak who has started to show the form we know he is capable of.

The score stayed that way until half time, none of us could have predicted what would happen in the second half.

Three goals in 10 minutes from Umut Nayir, Kaan Kanak (with his second) and Levent Kale put Ankaragucu 4-1 up to send the travelling Ankaragucu fans wild ! I must also mention, The European Ankaragucu group Avrulali Guculer made the trip to the game in their numbers from Germany, Belgium and Holland and looked like they had a great time.

There was even time left for Aydin Toscali to make it 5-1 and the result will send out a message to anyone involved in the play offs that Ankaragucu mean business and won't go down with a fight !!!