It’s less than a month until the Turkish Super Lig season starts as the fixtures were announced yesterday and Ankaragücü still haven’t played a single pre season game. Some of the players returned to training this week but with no manager in place and elections coming up, the club are again the laughing stock of the Turkish Super Lig.

Murat Agcabag this week declared his plans if he gains control of the club, while its the same old shit from Yiginer whose only plan is to ask for other people to invest money in the club. It’s believed that Yiginer has taken out two loans totalling 8.5 million Euros from the Banks with huge interest rates. The bank will therefor withhold any prize and sponsored money from the club until it’s paid back.

This will then lead to the exact same problems the club has faced over the years with players not paid their salaries. This week the club announced new contracts for Korcan Celikay, Aydin Karabulut, Sedat Agcay, Ilhan Parlak, Mehmet Sak, Zaur Sadaev, ,Ante Kulusic, Alihan Kubalas and Michal Pazdan.

Wilfred Moke has today agreed to stay with Ankaragücü and will be announced later on.

Incredibly all of the players were deemed not good enough to play for the team last season with Aydin, Mehmet and Zaur playing less than 10 starts combined. Michal Pazdan and Ante Kulusic signing new deals is great news for the club as they formed a solid partnership last season, but you have to worry that they will be let down by the club again.

Tito Canteros, Dever Orgill and Stelios Kitsiou could all be set to stay at the club too and we hope to find out their futures in the next week or so. The transfer ban still hasn’t been lifted so there is no news to report on new signings.

Hadi Sacko has signed with newly promoted Denizlispor after a successful loan spell at Ankaragücü last season and Djedje has agreed a 1 year deal with Kayserispor.

Ankaragücü still hope to play at Eryaman Stadium this season but again we have no confirmation after the last request was rejected.

In true Ankaragucu summer fashion, the chaos continues at the Capital club with financial problems mounting, and the fight for ownership of the club between Mehmet Yiginer and Murat Agcabag. The club have no Sporting director, no manager, no sponsorship, no players and have yet to be granted permission to play at Eryaman Stadium. Any new manager that does eventually come in has there work cut out with no pre season schedule or preparations in place.

On the management front, Mehmet Yiginer has agreed in principle with Adnan Erkan to become the clubs Sporting Director and Bulent Uygun to be the clubs next manager if he wins this months elections.

Onto the elections, and its a two way battle between Yiginer and Agcabag for ownership of the club. Yiginer has proved that he cant take the club forward as again none of the players have been paid for the last 6-9 months with Thomas Heartaux, Alessio Cerci and Thibault Moulin all asking the clubs official twitter page for their money. He is again relying on other people investing money in the club and cant give the fans an accurate figure of what the clubs debt is.

On the other had, you have Agcabag who has a plan in place and has promised to invest money, pay the players their salary, lift the transfer ban, open a club shop and online store, has agreed 7 sponsorship deals and has agreed in principle a new manager and sporting director. He also stated he is working with other businessmen who have agreed to put money into the club.

The problem for Ankaragucu fans, is trust. They have heard this all before in the past from other candidates who then came into the club and made an even bigger mess with all their lies and corruption. They know time is up for Yiginer, but is Agcabag the man and can he be trusted is the big question?

Finally, Altay Bayindir as we mentioned above, this week completed his 1.5 million euro move to Fenerbahce much to the anger of the Ankaragucu support. Not because he moved to Fenerbahce, but due to the fee the club have received for their prized asset. Altay is the youngest ever captain in Turkish Super Lig history. He is a Turkish U21 international who Senol Gunes has praised and will almost certainly call him up to the National team, and the club have agreed to such a feeble amount, which again shows how inept they are at managing a football club.

The Round Ball in Ankara would also like to send its condolences to our friend Murat Kaya and his family on the sad passing of his father. RIP
By Nady - July 11, 2019 1 comment: 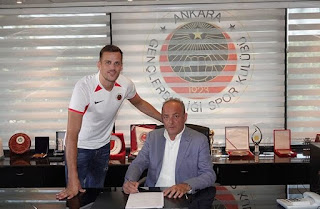 Gençlerbirliği have picked up Mats Seuntjens on a free transfer


The 27-year-old has joined the Super Lig club on a free transfer from Eredivisie outfit AZ Alkmaar, signing a two-year contract with the Turkish club.