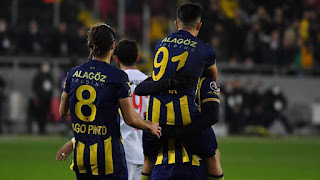 It was a pretty comfortable 3 points for Ankaragucu last night as they ran out 2-0 winners against bottom of the table Balikesirspor. Goals from Zahid and Murat sealed the 3 points to send Ankaragucu back to the Top of the table although the teams below them do have games in hand.

Mustafa Dalci made a few changes with Bahadir replacing Akin in goal after his impressive performance in the cup match against Nazilli. Erdi came into defence for Sinan and Owusu was preferred up front ahead of Eren.

The first chance of the game came for Ankaragucu after an excellent cross from Erdem was met by the head of Ali Kaan but Ozmen made an outstanding save to keep the score level.

The game was turning into a bit of a bore fest with neither team threatening in the first half until Nwankwo was red carded for the visitors on the 33rd minute. A high foot was judged to be dangerous play on Ishak and the referee didn't hesitate to send the Nigerian off.

Just before half time Ariyibi took advantage of a mistake at the back as he curled his shot from the edge of the box but Ozman made another good save. Murat and Ishak both had shots from distance just go past the post and also saved by Ozman.

Then came the opening goal, Pinto played the ball inside for Zahid who saw his shot take a deflection and this time there was nothing Ozman could do as Ankaragucu took the lead.

Into the second and Ariyibi went on one of his runs as he skipped past 2 players before seeing his shot come back off the post. Murat then put in a great cross for Ali Kaan but his header went wide when he should have scored.

Owusu Kwabena was having an excellent match and he went past a couple of players but his shot went wide and minutes later a brilliant piece of skill as he beat is man before volleying just over the bar. Ankargucu also hit the bar from a corner into the box and it looked like it was Yusuf at the back post who went close.

Minutes before the end Ankaragucu put the game to bed as Pinto played a nice ball through for Murat who finished brilliantly with the outside of his foot into the top corner.

Three points for Ankaragucu and some good performances in particular from Zahid and Owusu. But we also need to remember Balikeseirspor are bottom of the league with only 7 points and played 61 minutes with 10 men.

A much tougher game awaits this weekend as Ankaragucu travel to Samsunspor!