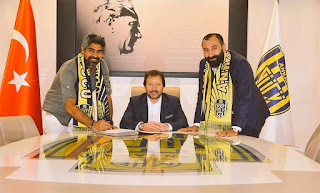 Ankaragucu today confirmed former player Ismet Tasdemir as new manager which has been given the vote of approval by the Ankaragucu fans. He will be joined by Ramazan Tunc who will be the clubs new sporting director and another former player Niyazi Guney who has been confirmed as club scout.

Tasdemir player 110 games for the club over 3 different spells scoring 9 goals and was described as a touch tackling midfielder by Jim who remembers him fondly. Reports also claim that he is hoping to make former Ankaragucu captain Hurriyet Gucer his first signing for the club. That will all depend on weather the management team can lift the transfer ban???? Hmmmm we've been here before.