Ankaragucu news round up! 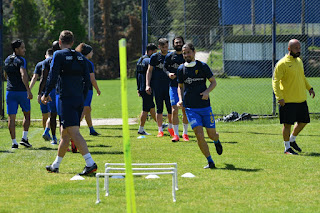 Its been a while since we posted on the Blog due to the shutdown of football and the Coronavirus outbreak. I hope everyone is safe and well and its not too much longer before we can get back to a bit of normality.

The Ankaragucu team returned to training last week and every player and member of staff was tested for Covid-19 before they started training again. Ricardo Faty tested positive and is currently in recovery while self isolating for 14 days. Gerson Rodrigues is also in self isolation after flying back into Turkey from Ukraine last week.

Fatih Mert has taken part in numerous interviews over the last couple of weeks and has reiterated his concern with the return of football, despite the financial implications for the club. The president stated that the Health and Safety of the players come first. This is after Faty tested positive, along with players from other clubs such as Besiktas and Erzerumspor who had 11 staff test positive. It looks unlikely that the Turkish FA will listen to the pleas from Fatih Mert as they look to play games behind closed doors.

In other news, Fatih Mert spoke of the financial situation at the club. There are a number of Sponsorships in the pipeline which were all set to go ahead, but have been put on hold until further notice. Money wise, there isnt any other income coming into the club and Management have had to put in more money to keep the club going. They have also introduced Club Membership to anyone who wants to become a member.

On the transfer front, Gerson Rodrigues, Konrad Michalak and Daniel Lukasik all want to stay at the club, but will again depend on finances. Rodrigues is also attracting interest from other Turkish Clubs. Dever Orgill said he would also be happy to stay at the club next season but depends on what other offers he has. The club have this morning being linked with 18 year old Bucaspor player Baris Sungur. The Izmir side have put a 500,000 Euro price tag on him with Basaksehir and Fenerbahce also said to be interested.

Finally, the club have started redevelopment of Tandogan facility for the youth team. Cengiz Paca has returned to the club and this was a big focus for him. Cengiz spoke of the future plans of bringing more youth players into the first team which has been neglected over the last 4 years, and the club will start with bringing the facilities back up to scratch.

Ankaragucu have always prided themselves on bringing youth through with the likes of Gokhan Akkan, Altay Bayindr, Kaan Kanak, Emre Tasdemir, Onur Atasayer, Umit Kurt and Umut Nayir all coming through the academy before moving on. With limited budget to sign players, the youth academy will be one of the focal points for the club moving forward.
By Nady - May 19, 2020 2 comments: