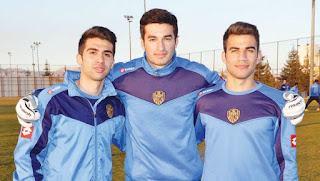 The three players above Emre Tasdemir, Gokhan Akkan and Hasan Ayaroglu should have been the core of the Ankaragucu team that saw its way back to the Super Lig. Instead Emre Tasdemir last season signed for Bursaspor and was just recently called up to the Turkish National Team. Today Gokhan Akkan said farewell to the club after signing for Super Lig side Caykur Rizespor in a deal worth 900,000 TL to the club. That leaves Hasan Ayaroglu remaining but it looks like the youngster will also sign for a Super Lig side in the next couple of weeks.

Aytac Oden has already signed for Eskisehirspor a couple of weeks ago as the leaves continue to fall at Ankaragucu. In some positive news Orhan Evci and Metin Ilhan both signed new deals with the club with Orhan turning down moves to the Super Lig.

Gokhan Akkan spoke of his sadness leaving the club, but said that he wanted to see the club receiving money as opposed to leaving next season when his contract runs out on a free transfer. Losing Gokhan is a blow to the club but receiving that kind of money with the player only having a year left on his contract is a good deal for both clubs. Ankaragucu have some talented young Goalkeepers such as Turgut Kirveli, Altay Bayindir, Kaan Ates and Cihan Bal who will all fight it out for the number 1 jersey this coming season.

In other news, as OZ Kanka and John both pointed out today, Former Ankaragucu president Ahmet Gokcek has been appointed to the executive board of the Turkish Federation. I will stop right there before i post something i regret.......
By Nady - June 25, 2015 1 comment:

There was an election today for a new chairman and board for the Turkish Football Federation. Don't worry about most of the blokes who got in... you just need to know the one result that symbolizes everything that is wrong with Turkish football:

Ahmet Gokcek is now a member of the Executive Board.

With the season having finished and the players already approaching pre season training, I'm afraid the news for Ankaragucu doesn't get any better. One of the clubs key players from last season Aytac Oden has signed for rivals Eskisehirspor in the Turkish Super Lig. Mehmet Yiginer claims the club offered him a new contract but both Eskisehirspor and Goztepe offered the player more money. In the end Aytac chose to play in the Turkish Super Lig and I'm sure no Ankaragucu fan will hold that against him.

On the financial side, Mehmet Yiginer claimed yesterday that the Ankara Municipality donated 1 Million Lira to the club which has helped pay depts to former players and wages to current players. He did however stress that the club need more help just to survive and their is still a lot of work to be done.
By Nady - June 21, 2015 No comments: 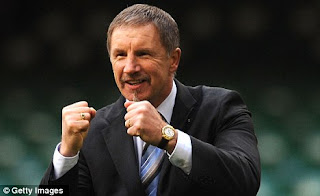 Gencler have signed former Preston North End midfielder Stuart Baxter as their coach for next season, the first Brit ever to manage the Ankara side.

Baxter brings a wealth of international experience of coaching at a club and national level from Scandinavia to South Africa. You're spoiling us, Mr. Cavcav.

If he's reading this blog as part of his research, we wish him the very best of luck. And if he's not.

But he will be, if he isn't already.

The Ankaragucu and Genclerbirligi Kankas will be meeting in The Red Lion Club on Saturday evening 13 June for the End of Season Party and to say ........ hello summer ! 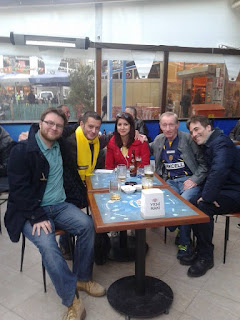 Due to the fame of the Kanka Group, The Red Lion Club are flying in world famous Rock Group, The Hatays, to perform live at 9pm. 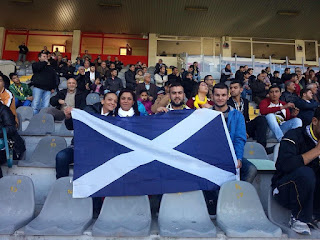 Eski Kanka will be bringing something special from Scotland.    Not the Saltire Flag, but something liquid !!! 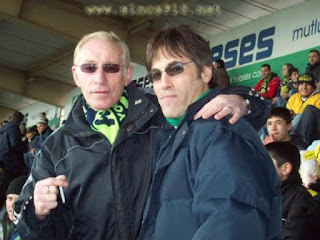 It has been stated many times that Ankaragucu fans are dangerous.    However, the two hooligans in the above photo have promised to be on their best behaviour on Saturday !

Look forward to seeing all kankas, kankies and friends of Ankaragucu and Gencler there on Saturday. 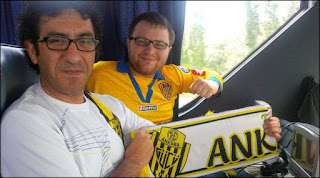 Fellaini Kanka and Cider Kanka made it to Bursaspor's Turkish Cup final match on Wednesday in Bursa... 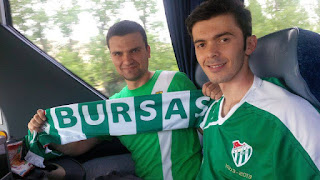 Along with some Ankara-based economic migrants from Bursa

And, though there wasn't a huge Ankaragücü contingent there, a lot of the locals had Ankaragücü scarves or kit, and many of our present and former players came to the match to support our sister club.

Not that they needed outside support - the whole city of Bursa was out in green and white in support of their team, including most of the cashiers and attendants in the shops. Spotted by some of the hospitable locals in our Ankaragücü gear, we were plied with drink and questions about how our season had gone.

From our perch behind the Bursa goal, it looked like Bursa played a blinder, as well. They managed the impressive feat of making the Galatasaray midfield look lacking, playing a smooth passing game and setting up a string of shots on goal. When Bursa got a penalty in the Galatasaray box and went 1-0 up, the crowd was understandably delighted, but not so surprised.

And yet, we watched as all those beautifully set-up shots went to waste. Galatasaray won 3-2, clawing back the goals and gradually taking over the game (even if Bursa kept in it to the end).

This was all played in Dartmoor-like conditions as a considerable arsenal of flashbangs and fireworks smuggled in by both teams' supporters left misty smoke all over the pitch.

Our hosts were less than pleased, and in place of the hours of celebrating we had anticipated, we ended up drowning our sorrows in a terrace bar, watching some of the Teksas youth members running around with knives the size of their forearms.

Over drinks, Fellaini Kanka asked me, "Has anyone ever told you that you look like Ramzan Kadyrov?" and I had to admit that they hadn't. In the midst of the thick cloud of disappointment that descended over the entire city and the heavy purgatory rain that followed, it seemed a slightly more relevant question.
By John A - June 05, 2015 1 comment: