It was another busy day for the Ankaragücü management team as they completed the double signings of Muhammed Kehinde and Bakary Kone as the club prepare for the season opener next Friday night.

Bakary Kone is a big signing for the club who beat off competiton from Trabzonspor and other European clubs to sign the 30 year old centre half on a 2+1 year contract. Kone spent the bulk of his career in the French top flight playing over 200 games for Guingamp, Lyon and Strasbourg. The Burkina Faso International with 76 caps had an unsuccessful spell in Spain with Malaga after he was unable to settle moves to Ankaragucu on a free transfer.

Muhammed Kehinde is somewhat of a surprise signing after it was announced last month that he wouldn’t be returning after a loan spell last season. With the club losing out on the signing of Umut Nayir they have now moved to secure Kehinde on a 3 year deal. Kehinde scored 7 goals in 24 games last season and only showed flashes of his potential. He’s still only 24 and has a lot of improving to do especially now that the club are in the Super Lig, but he has all the attributes such as pace, power and he can score goals. Let’s hope that he repays the faith shown by İsmail Kartal.

In other news, the preparations for the Super Lig haven’t been ideal due to uncertainty of where the club would be playing their home games. That has now been confirmed as Yenikent Stadium until Eryaman is ready. However there was more bad news today as the TSYD Cup scheduled for this weekend was cancelled due to a Yenikent being unavailable. That means with less than 2 weeks until the season starts Ankaragücü have only played 1 pre season match.
By Nady - July 30, 2018 No comments:

Ankaragucu kicked off their pre season schedule with a hard fought 2-2 draw at Erzerumspor. Their were plenty of positives to take from the match but also areas of concern in which İsmail Kartal and his coaching team will need to address before the season kicks off against champions Galatasaray.

New signing Ricardo Faty impressed right from the very start of the game. The Senegalese International signed from Bursaspor is a big physical, imposing player who won the ball all over the pitch and will be key to protecting the Ankaragucu defence.

Erzerumspor started the better of the two sides and had the ball in the back of the net after 8 minutes but was ruled out for offside.

The major concern for Ankaragucu in this game was the performance from the defence. Two many times they were caught out in behind and lacked someone with a bit of pace. The defence gifted Erzerum the lead on the 30th minute when they gave a way a penalty. Özer Hurmaci stepped up from the spot and made it 1-0.

It took Ankaragucu only 5 minutes to find the equaliser, when a great cross into the box was met by the head of Alihan who put the ball into the back of the net to make it 1-1.

Five minutes later and Ankaragucu should have taken the lead. Another good cross into the box this time for Ricardo Faty who headed inches wide. Mehmet Sak had a shot from distance saved easily by Hakan a minute later.

Just when it looked like the two sides would be going in level at the break, Erzerumspor took the lead. Osman Sahin went past his man before shooting past Korcan from outside the box to make it 2-1.

Into the 2nd half and Youness Mokhtar came on half way through, the Moroccan winger looked the part and is another Who I’ll be a big player for the club.

The first chance came for Erzerumspor who hit the bar on the 59th minute, Ankaragucu went straight up the other end and Enes should have scored with only Hakan to beat but the keeper made a good save.

A late goal for Ankaragucu spoiled the home fans hopes with only two minutes to go. El Kabir was brought down on the edge of the box. Up stepped Erdem who fired into the top corner but Hakan will  be disappointed he never done better.

So final scored 2-2 which İsmail Kartal will be happy with. The squad still needs more quality at the back, middle of the park and another striker before the season starts.
By Nady - July 21, 2018 3 comments:

Ankaragücü have pulled off a major coup with the signing of Moroccan winger Younes Mokhtar on a 3 year deal from FC Zwolle. The 26 year old will team up with his fellow countryman Mostapha El Kabir.

Mokhtar was born in Holland to Moroccan parents and came through the PSV youth academy. The 26 year old has spent most of his career playing in the Super Lig but had a short spell with Al Nasr in Saudi. He scored 10 goals in 36 games last season and had 10 assists.

His preferred position is left wing and is known for his skill, dribbling and speed that will cause problems for defenders in the Super Lig.

Mokhtar turned down offers from Europe and Turkey to sign with Ankaragücü claiming that he heard good things about the club and it’s fans and was looking forward to playing in front of them.

The team is starting to shape up now with more signings expected in the coming weeks.
By Nady - July 17, 2018 1 comment:

Since then, El Kabir has struggled and had a pretty unsuccessful spell at Antalyaspor scoring only 1 goal. There is no doubting the talent of El Kabir, but a lot of questions are being asked of his diet and attitude. He is carrying far to much weight and that is something İsmail Kartal will need to address when he joins the team for pre season training tomorro.

In other news it looks like Ankaragucu will also complete the signing of FC Zwolle forward Younes Mokhtar. We are awaiting confirmation from the club regarding that deal.
By Nady - July 16, 2018 1 comment:

Ankaragucu last night completed the signing of Osmanlispor left back Tiago Pinto on a 3 year contract. The 30 year old former Rio Ave defender has spent the last 3 seasons at Osmanlispor but decided to move on after the teams relegation to Lig 1.

Having spoken with people who have watched Tiago on a regular basis, their opinion is that he has been one of the best Left backs in the Super Lig and will be an excellent signing for the club.

Tiago is an attacking wing back and the Ankaragucu fans can look forward to watching his performances as the left back position has been an area of concern since Onur Atasayer moved to Bursaspor 2 years ago.

There will be more signings to come in the coming weeks and we I’ll have all the latest news as it breaks.
By Nady - July 15, 2018 4 comments: 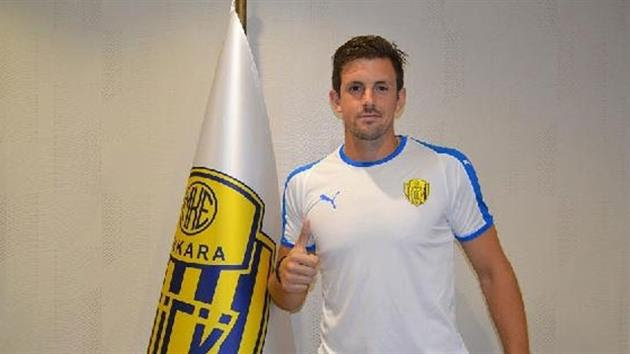 Johannes Hopf will remain in the Capital as he moves from Genclerbirligi to Ankaragucu on a 3 year contract. The Swedish keeper will join his new team mates at Erzerum training camp and will now fight it out with Korcan Celikay and Altay Bayindir for the number 1 jersey.

The move to sign Hopf has come as a bit of a surprise with both Korcan and Altay highly regarded by the Ankaragucu support. Having watched Hopf play on many occasions for Gencler, I believe Ankaragucu have signed a very good Goalkeeper who performed very well for Gencler after a shakey start.

After spending 3 years at Gencler it’s time for the next chapter in the 31 year olds career as he targets a place in the Sweden national team having been capped back in 2016.

In other news, Ankaragücü face Akhisar tomorrow in their first pre season friendly of the summer, we will have full details and the report tomorrow. 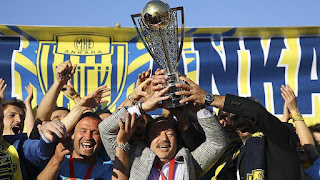 The Turkish Super Lig fixtures were announced on Monday afternoon and Ankaragucu couldnt have been handed a more difficult opening game. They will mark their return to the Super Lig after 5 years with a home match against champions Galatasaray. Unfortunately at this stage we dont know where the game will be played due to the current stadium situation.

The Kanka group will be planning an away trip to Bursaspor on Week 8 and will have more details nearer the time. 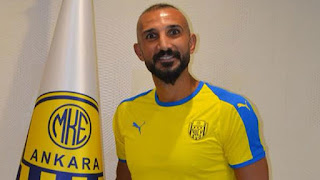 Ankaragucu have completed the signing of Osmanlispor centre half Yalcin Ayhan on a free transfer. The 36 year old will join the team for pre season training in Erzerum.

The news was met with mixed reaction from the Ankaragucu fans, many who believe he is past his best at the age of 36, but some happy with his experience and look at Sedat Agcay his former team mate and also at the same age, who had an excellent season for the club just past.

Sedat is a towering no nonsense defender who at 6ft 3 is excellent in the air and who played a big role for Basaksehir where he spent 3 years helping the club back to the Super Lig and Europe.

Last season he signed with Yeni Malatyaspor but played only 13 games before moving onto Osmanlispor in January. Unfortunately for Yalcin he was part of the Osmanlispor team who was relegated and now has another chance at playing in the Turkish top flight.

In other news, Ankaragucu have been linked with moves for Kevin Monnet Paquet from St Etienne, Diumerci Mbokani from Dinamo Kiev and Maxi Lopez from Udinese. The club are expected to be busy in the next couple of weeks as they prepare to be ready for the start of the Super Lig.

Its still unclear where Ankaragucu will play their home games. It was announced yesterday that the team would play at Afyon which is 3 hours outside Ankara. That move has fallen through as the stadium doesnt meet Super Lig criteria. The team are now urging the Mayor of Ankara to help the club play at the 19 Mayis Stadium until Eryaman is ready.
By Nady - July 12, 2018 1 comment: 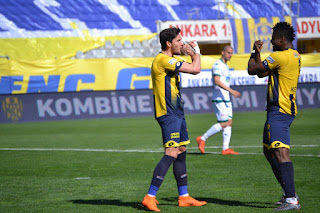 Its been a busy week for Ankaragucu on the transfer front with Ricardo Faty, Alper Onal and Thievy Bifouma all signing for the club. Faty has already joined the team for pre season training in Erzerum.

Tuna Yilmaz yesterday confirmed a number of players have been told they dont have futures at the club and have moved on. Gencer Cansev has moved to Altay while Ferhat Kiraz is in talks with Eskisehirspor. Kibong Mbamba, Tonia Tisdell, Lanre Kehinde, Yusuf Abdioglu and Abedelkadir Kayali have also left the club.

It looks like Ankaragucu have missed out on Umut Nayir after the surprising news yesterday that he has agreed a move to Besiktas after terminating his contract with Osmanlispor. Tuna Yilmaz also confirmed that more new players will arrive in the coming weeks, with Ismail Kartal expected to bring in a couple from his former club Fenerbahce.

In other news, it looks like Eryaman Stadium will not be ready until 6th of September at the earliest meaning there is uncertainty as to where Ankaragucu will play their first couple of home games. The team has asked to play at the 19 Mayis Stadium until Eryaman is ready and should find out in the next week or so.
By Nady - July 03, 2018 1 comment: