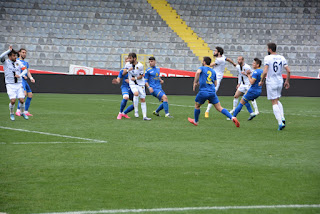 Ankaragucu are away to Gumushanespor this weekend as the team look to restore a bit of pride after the recent run of poor results. New coach Hayati Soydas now needs to focus on getting this team ready for the playoffs providing they finish in the playoff places. Their were a few positives from last weeks performances especially the amount of chances we created as a team, however that problem of scoring goals continued to cause a headache for the management team and fans.

The worrying thing about last weekends performance was that the usually reliable defence also weren't at their best, while goalkeeper Ferhat continues to make silly mistakes which again resulted in the team dropping points. Ferhat has been playing with a niggling injury, hopefully Turgut will come back into the team to allow Ferhat to recover fully.

Onur Atasayer again impressed with his forward runs and attacking play, he does however need to improve on the defensive side of his game. The 20 year old left back has reclaimed his place in the team from Mehmet Tasci and certainly hasn't let the team down. Hasan Ayaroglu also found his place back in the starting line up and the new coach will be hoping he can rediscover his impressive form from last season.

Ankaragucu will be without 6 first team players with Gurkan Alver, Orhan Evci and Mustafa Ozturk all out injured, while Sedat Bayrak, Emrah Bozkurt and Sertan Vardar all suspended.

The last time both sides met ended in a 1-1 draw at the 19 Mayis stadium in Ankara. Ali Ozgun gave Gumushanespor the lead before Mehmet Tasci grabbed an equaliser before half time. Gumushanespor lie 8th in the league only 6 points behind Ankaragucu and still have playoff aspirations themselves. A win will see them within touching distance of those playoff places and they will be looking to give their home fans something to cheer about.

Ankaragucu still have enough quality in the side to go and bring the 3 points back to the capital, will it be another disappointment or will they finally live up to expectations?
By Nady - February 26, 2016