It was many UNHAPPY returns to the Stadium for my first match since 17 January due to an End of Term visit to Scotland and a Stadium Ban.

Also, many HAPPY Returns to Maniac Kanka Harun’s beautiful daughter, Hazal, who is no longer a teenager !  (more of the celebration details later).

I entered the Stadium at 1pm during the players warm-up and was ‘greeted’ with some bad mouthing by some of the Maraton fans towards the players.   The players were trying to respond but were pulled away from the fence by the Coach.   Not a good sign before we had even kicked-off !!   It was ominous also that Gecikondu and Maraton didn’t invite the players over pre-match as they ran on to the pitch !

I was joined in the Stadium by Posh Kanka Ahmet, Scouse Kanka Marcus and his colleague and friend, Andy, who hails from SW London but supports NE Spurs !   This was Andy’s first Ankaragucu match and I will give you their one sentence quotes at the end of this report. 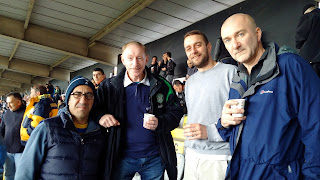 Surprisingly, in view of recent results, the Stadium was quite busy with Gecikondu full, Maraton about half full and the away end had 15 poor souls.

It was a frustrating match for us long suffering kankas with Ankaragucu having about 70% possession and firing blanks as soon as they came anywhere near the Sivas penalty area.   Even Ferhat was a spectator for most of the match.   He had two easy saves to make and then just prior to the final whistle he retrieved the ball from the goal when Sivas equalised.   A poor performance from Ankaragucu in terms of scoring goals, and again I will predict that they will miss-out on qualifying for the Play-Offs !

Goksu was the only outstanding performer for Ankaragucu and he almost set-up the first goal in the 7th minute with a great run down the right wing and crtoss into the danger area, but the shot on goal was blocked.

Goksu’s play obviously inspired Gecikondu who finally ‘woke-up’ and started to sing.   Their silence had been deafening !

Ankaragucu had two golden opportunities in the 17th and 29th minutes when they were awarded free kicks just outside the box, but both were fired into the wall and cleared.

Lots of glum faces at half time, but as we all know only too well, having the lion’s share of possession doesn’t necessarily win matches !

Into the 2nd half and Ankaragucu had two more opportunities to open the scoring from free kicks but the 1st was saved and the 2nd was over the bar.

Again, lots of Ankaragucu possession with the final ball being wasted.   Serkan and Emrah had chances but their shots were over the bar with the goalkeeper having an easy time of it.

The match was petering out into a stalemate when in the 90th minute Goksu picked up the ball on the right side of the penalty box and dribbled his way past a couple of tackles before shooting into the opposite corner of the goal.   I for one was speechless and was rooted to the spot in amazement.   A great individual goal by the stand-out player on the field of play !

Then deep into time added on, Sivas was awarded a free kick on the left which was floated into the crowded penalty box.   The Ankaragucu defence failed to defend it and a Sivas player headed in for a shock equaliser, which in effect was their first meaningful attempt on goal.

A pathetic ending to the match.    I hesitate to say ........... ‘against the run of play’, because Ankaragucu’s futile efforts didn’t deserve to win all 3 points.

The quotes of the day were –

Marcus – ‘It wasn’t a game of 2 halves, because both halves were dire’ !

Andy – ‘the passion of the fans was not matched by the players’ !

Off we trudged to the Yeni Sedir Pub to celebrate Hazal’s 20th Birthday which was the only highlight of the day.   Her presence and her smile put smiles back on our faces ! 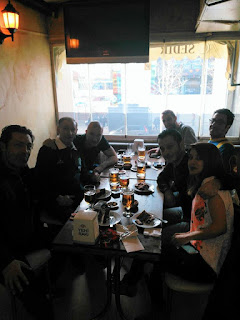 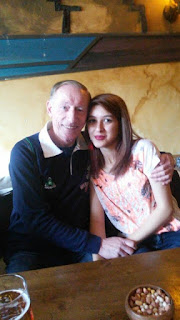 The Birthday girl with her 'favourite uncle' !! xx

Next up is the away match to Kartal, and if Ankaragucu keep firing blanks and dropping points it won’t be long before the fans start losing patience, which in turn will surely bring more Stadium Bans as Ankaragucu stutter to close the season down.    We know from past experience how dangerous they are when riled !!

Another season in the 2nd League beckons me thinks !