Gencler win a match. We win a new pub!

As I have said in other media commitments this week - this is not the time for football! It is the time for laughing at another English batting collapse. It is the time for laughing at countries which can't make a pool stay blue. It is time to get interested in Women's Sevens Rugby. But it is not the time of year for football. So it was with deep reluctance that Little Oz Kanka and myself trudged off in the 34 degree heat of the capital to watch a pre-season match.

The most important thing about today was taking a recky for what will be our new pre- and post-match pub for the season. As you know it is often quite difficult to find a pub in Ankara showing a Genclerbirligi match if it clashes with any match involving the Istanbul teams.

A solution has finally been found with Orcan of the Karakizil fan group going into management with a couple of others to take over a pub on Olgunlar Sokak (next to Soul Pub and near the book sellers market) and to open the Alerta Pub.

The important stuff first. An Efes 500ml draught is 10 lira. They also have Becks and Bomonti on tap. They have a kitchen which sells the normal Ankara Gourmet Pub stuff (hamburgers with toothpicks in them etc) and the toilets are very clean.

Orcan has decorated the inside with various scarves of football teams and he is particularly proud of having a scarf from teams from both capitals of Macedonia, the country and the province. He says he can't wait to get his first Greek customer.

Most importantly the pub will be showing each and every Genclerbirligi match. No exceptions.

Then we showed up to the footy.

With no Passolig needed for this match a whole heap of fans who are now into their third year of boycotting the e-ticket system showed up and they were clearly having a ball.

Unfortunately the same can't be said for our first 11 out on the field. With both Campos and El Kabir having left over the summer it just looked like we didn't have anyone who could bring a spark to the game. We also missed Hleb who was so good last year at providing balls to players in good positions. We dominated but still looked rubbish. Adanaspor had the first chance of the match but fluffed it and it wasn't until the dying seconds of the first half that we got onto the scoreboard. 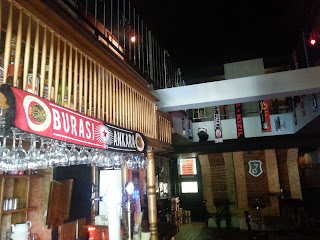 It was a freekick on the right, outside the box. We all assumed Irfan would try to put it onto Stancu's head but instead he placed it perfectly, arced it over the keeper and into the top corner.

Second half was a bit more fun as Adanaspor came forward a bit more and we made half a dozen substitutions (it was a pre-season friendly). The man who particularly impressed me was a fellow who we signed just a couple of days ago, a Romanian by the name of Cosmin Gabriel Matei. He played on the left wing and made a number of good runs which could have led to goals if not for rubbish finishing by others.

Our second goal also came from a free kick. I think it was Selcuk Sahin who took it from outside the box and forced the keeper to make a one handed parry at the ball. With the keeper on the ground after his impressive save, the ball popped up nicely for one of our players who was on the spot to head it in.

Two goals, both from set pieces.

Adanaspor got one back a bit later after some rubbish defending by us.

All up... to be brutally honest I think it may well be a long season ahead for us Gencler fans.

So, with that win we are in the final of the TSYD 15 Temmuz Demokrasi Kupası which will be on Saturday night at 8 pm against whichever team won the match that I wasn't paying attention to (either Konya or Karabuk). See you at the Alerta Pub at 6pm!
By Oz Kanka - August 12, 2016