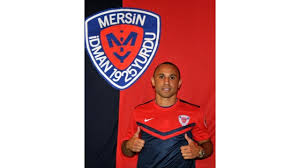 Watched the Championship match on TRT this afternoon and ex-Ankaragucu Brazilian attacking midfielder Tita (photo above) strutting his stuff for Mersin.   He may be 35 years old, but we could do with him back here as Ankaragucu’s midfield general, a position that hasn’t been satisfactorily addressed by Ankaragucu.   His passing and vision was excellent, but the final efforts from the Mersin forwards were abysmal.

There was a good standard of footie on display from both teams and if Ankaragucu do gain promotion to The Championship this season it’s a definite MUST DO to strengthen the team for this league.    However, first things first, and 3 points tomorrow against Nigde to consolidate their position at the top of the league.

PS – Guven Varol was another ex-Ankaragucu player today for Mersin, but he had a poor match by his standards.