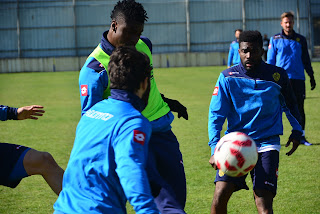 Ankaragucu face rivals Eskisehirspor for the for the first time in 5 years with both sides striving to get back to where they belong in the Super Lig. Eskisehirspor ran out 5-2 winners that day at the 19 Mayis Stadium but both sides fortunes have changed since then with Ankaragucu on the ascendancy while Eskisehir are struggling financially and fighting against the unthinkable relegation to Lig 2.

Yet again, the TFF have banned Ankaragucu fans from travelling to the match which has raised complaints from both sets of supporters this week. No away fans have been allowed to travel to this match for the last 8 years after 2 Ankaragucu fans were stabbed in Eskisehir. The TFF have taken steps to avoid any violence between the two sets of fans, however the Eskisehirspor tribune leader this week spoke out against the ban and used the Istanbul clubs as an example of many clashes between both sets but no permanent ban has been placed on them.

Ankaragucu go into the match on a 5 match unbeaten run sitting in 3rd place only 3 points behind the leaders Umraniyespor. A 1-0 win over Istanbulspor last weekend will have pleased Ismail Kartal especially keeping a clean sheet and having created many chances.

Eskisehirspor are only 3 points outside the relegation zone, however they have only lost 1 of their last 5 matches and will have 25,000 passionate fans behind them at the Eskisehir Stadium. While both sets of fans may not like each other, their is a mutual respect in that both sets of fans are passionate, loyal and will make a fantastic atmosphere making it the game of the week in the Turkish Lig 1.

Ismail Kartal will likely go with the same starting line up again, with Lanre Kehinde set to take a place on the bench again with Ilhan Parlak getting the nod up top with Umut Nayir. A settled starting line up is key to any team challenging for a championship and the team is starting to come together and the fitness levels are also much better than they were a few weeks ago. Much credit has to go to the manager Ismail Kartal for Ankaragucu look a very solid and organised outfit, and if they can just sort out some of the issues in defence then they have every chance of winning 2 championships on the bounce.

Although Eskisehirspor linger towards the bottom of the table, they are a much more talented team than what they are showing. They have a few key players who the Ankaragucu team must pay attention to closely otherwise they will be punished. Former Ankaragucu player Hasan Ayaroglu has impressed this season after an excellent campaign on loan at Kastamonuspor last season. Erkan Zengin although 32 now is still one of the best players in the division, while Hasan Acar is a talented 22 year old midfielder who continues to catch the eye. Bruno Mezenga on his day is capable of the brilliant, but also misses to many chances and the reason why he finds himself playing in Lig 1.

The game kicks off at 14:30 Turkish Time on Sunday afternoon and will again be shown live on Bein Sports Max HD. For information on how to watch the match with the Kanka Group please contact Jim and he will let you know where they are watching the game.
By Nady - November 03, 2017