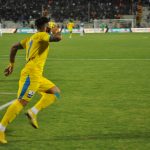 Ankaragucu are back at home on Wednesday night at Yenikent as they host amateur side Serik BB in the Turkish Cup. This will be an opportunity for some of the fringe players such as Alessio Cerci, Kehinde, Anton Putsila, Erdem Sen, and Mehmet Sak to get some minutes under their belt as they look to break into the starting line up.

Their will be interest in particular in former Italian international Alessio Cerci who was the clubs big signing in the summer but so far hasnt featured much as he isnt fully fit. Questions have always been asked about Cerci and his attitude and also fitness as there is no doubting the players talent. Hopefully he isnt here just for a final pay day and works hard to fight his way into the starting line up.

Ankaragucu again showed tremendous character and team spirit in their 1-0 away win at Erzerumspor thanks to a Kenan Ozer last minute goal. This was despite the team playing 83 minutes with 10 men due to the sending off of Bakary Kone.

The Turkish Cup hasnt been kind to Ankaragucu over the last few years having been knocked out by lower league Opposition. Serik play in the 4th flight of Turkish football an have had an unbeaten start to the season. They have former Galatasaray and Eskisehirspor playmaker Erman Kilic in their team and will be no pushovers.

Looking at the previous 2 winners of the Turkish Cup Akhisar and Konyaspor, it should give Ankaragucu some motivation that a good run could see them go all the way and qualify for European football next season. The league is the priority but a good run in the Cup and an opportunity to win one of Turkish footballs biggest competitions is something that should be the aim for the club and taken seriously this season.

For anyone looking to take in Wednesdays game, it kicks off at 7pm and you will be able to buy tickets on Passolig.
By Nady - September 24, 2018