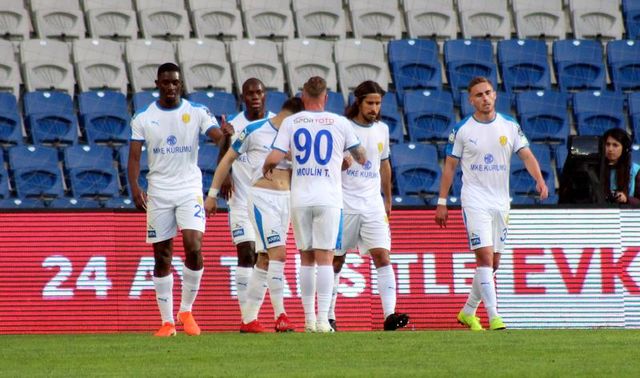 Ankaragücü dropped further into the danger zone this weekend after a disappointing 2-1 defeat at joint top Başakşehir. The team were dealt a blow earlier in the day when Altay was ruled out due to a shoulder injury and would be replaced with Korcan.

Başakşehir started the game strongly and almost took the lead after 6 minutes but for a brilliant save from Korcan.

It was all Başakşehir, but Ankaragücü took the lead against the run of play with a fantastic counter attack. Sakho broke free down the left hand side, before playing the ball infield for Orgill, the Jamaican picked out Boyd in the box who cut inside before firing past Mert to make it 1-0 Ankaragücü much to the delight of the travelling fans.

Most of the game was being played in the middle of the pitch without either side creating anything of note. Napoleoni went closest for the home side as he cut infield before firing over the bar. Ankaragücü were defending very well and breaking up all the Başakşehir attacks.

Into the second half and a disastrous start for Ankaragücü as Bajic made it 1-1. It did look offside but the referee checked with VAR and awarded the goal.

Fifteen minutes later Başakşehir went in front after Korcan could only spill Visca’s shot but Robinho was on hand to make it 2-1 for the home side.

There were a couple of half chances for both sides before the full time whistle but in the end Başakşehir held on for the 3 points and it now leaves Ankaragücü 4 points ahead of the relegation zone with 2 games remaining.

Up next is a home match with Sivasspor next Monday night in what will the biggest game of the season for the club. A win or possibly a draw can secure the teams place in the Super Lig next season.
By Nady - May 12, 2019