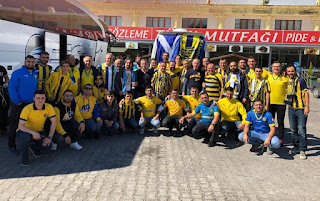 Ten years, where does the time even go? Seems like yesterday that I decided to take my interest in Turkish football to the next level by chosing a team to follow. I’ve always had an interest in Turkish football, from the days of Welcome to Hell when Galatasaray took on Man Utd at the old Al Sami Yen stadium and Jay Jay Okocha was staring for Fenerbahce. The flares, pyro displays and incredible atmosphere had me hooked.

People always ask why Ankaragücü? How does a guy from Scotland become and Ankaragücü fan? Even people from Ankara don’t support the club. 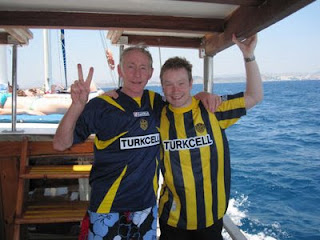 Well the picture above played its part, this guy just had Scotland ripping right out of him. I had a look at every Super Lig team on the internet and most clubs never had an English site, plus I didn’t want to chose one of the Istanbul sides. When I typed in Ankaragücü his blog came up and the picture above was one of the first posts at the top of the page. A Scotsman in Ankara who follows Ankaragücü!! Sent him a message and a few months later I arrived in Ankara for my first ever trip as we took on Fenerbahce at home.

That was the start of an amazing friendship with the Kanka Group, made up of foreign ex pats from Britain, American, Australia, Holland, Romania, Portugal and many more countries including local Turks.

I still remember my first night in Ankara with my Mrs who had been dragged along to see one of the
most violent teams in Europe for her first every football match. The Kanka Group had arranged a dinner for us at Beyzade restaurant. People who I had never met before turned up to make us feel welcome and was the start of a friendship that we still have to this day.

The match itself was as expected, eventful off the field with fights breaking out and smoke bombs an Flares been set off throughout the stadium. Brilliant, this is exactly why I had travelled to Ankara! The videos I watched on YouTube of Ankaragücü fans had certainly lived up to expectations.

That was me officially and Ankaragücü supporter, from then on in I would make it an annual trip to watch the team. The following year I took in the match at home with Bursaspor who are friends of Ankaragücü but we lost 5-1 and having lost 3-0 to Fenerbahce in my first trip I was beginning to think I was a curse.

The curse was broken the following year after we were relegated to Lig 1 I took in the match with Kartalspor. Timur Ozgoz scored the only goal of the game and I finally got to see the team win. 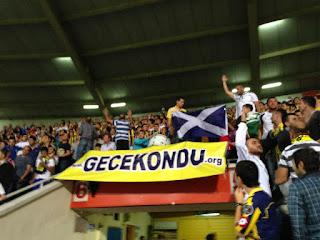 During that trip I got to meet with the leader of one of Turkeys most famous ultra groups Gecekondu. One of their group members Bugra Mete took me to the Slums in Ankara, a place that has a tough reputation and one in which your safety can’t be guaranteed as you are an outsider. I had read stories of Ali and seen many videos and decided to take the chance with Bugra as we entered Dernegi his home town.

When Bugra explained I had come from Scotland to see Ankaragücü, Ali went out of his way to make sure I had a good time. He took us for dinner, presented me with a gift and the next day at the match invited me up to sit next to him with my Scotland’s flag as he led a chorus of chants. The atmosphere was incredible.

Over the years I have met some great people following Ankaragücü who always go out of their way to make sure I have a good time in their City. Their home is the Capital of Turkey and the centre of politics and the military. It’s like a ticking  time bomb at times but the people are the most generous you could meet, including Ankaragücü fans (if you are on their side).

I remember one of the trips, I met with the Akyildiz family. I met them after the match and they invited me to their home the next day for dinner. After making me a 5 course meal and buying me they new Ankaragücü strip they became Rangers fans and still to this day follow our results. 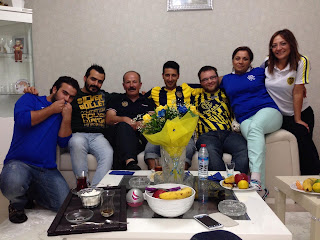 Last season I decided to take in my first away trip with the club. An away match to Bursa which was 7 hours there and 7 hours back by bus. Again we lost 1-0 but what an away Support. Just over 5,000 Ankaragücü fans made the trip and another incredible atmosphere. Taking in the game with the Kanka Group including Harun, Ahmet, Tansu and all of the others ticks off another must do as an Ankaragücü fan.

Next up will be taking in a game at the new Eryaman Stadium and then a trip to Istanbul for an away match. Hopefully in the Super Lig as it looks like we are heading for another difficult season.

The best memory of them all following Ankaragücü was just over 3 years ago as the team clinched promotion back to Lig 1 from the 3rd tier. We were 1-0 down win 10 minutes remaining against Tuzlaspor before 2 late goals from Kenan Özer and Enes Kubat sealed the victory. The scenes were incredible, I saw grown men cry after watching their team suffer for years, promotion to Lig 1 was complete.