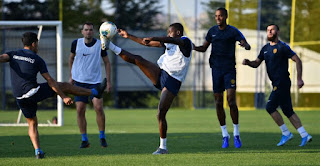 Its 6 years since the last competitive match took place between Ankaragucu and city neighbors Genclerbirligi. It was back in 2012 when Genclerbirligi won 1-0 thanks to a Hursit Meric goal in the season where Ankaragucu were relegated to Lig 1 and played with the youth team.

There are so many similarities between that Ankaragucu team and this seasons team. Both had a transfer ban in place, a couple of experienced players and the rest of the squad filled with youth players. The current Ankaragucu team do have more quality but face a similar impossible task of staying in the Super Lig.

The Ankara derby isnt like other derbies in Turkey or across world football where there is an intense rivalry, hatred for each others team and clashes between both sets of fans. Instead, there is a mutual respect between both sets of fans who share the same location for their training facilities separated by a large fence and its common for players and managers to have played with both sides.

Mustafa Kaplan who is current manager of Genclerbirligi is very well respected by the Ankaragucu support and helped keep them in the Super Lig last season before making the move to their neighbors in the summer.

Aydin Karabulut and Ante Kulusic who both play for Ankaragucu have also spent periods in their career with Genclerbirlig. Kulusic in particular was a fans favorite at the club and will be looking to put one over his former team.

That said, despite the Ankara derby not being the most intense derby, there will still be a great atmosphere at the game as Ankaragucu fans are unique in that they create an atmosphere in every game unlike a lot of clubs who only turn up for the bigger games.

After a spirited performance last weekend at Fenerbahce where Ankaragucu were disappointed to have come away with nothing in a 2-1 defeat, the performance would have given them confidence going into the game against Genclerbirligi.

Unfortunately for Ankaragucu, they have been dealt more bad news this week with Cebrail Karayel ruled out with a broken foot, Tito Canteros out for 2 weeks with an injury in training and Moke also out after picking up an injury in training. Kitsiou will come back into the team for Cebrail but both Canteros and Moke are big blows for the team who now only have 38 year old Sedat and Ricardo Faty as recognised midfielders.

The game would have been difficult enough for Ankaragucu had everyone being fit, but losing key players like Canteros and Moke will make it huge task for the club against Gencler who are rooted to the bottom of the table.

Although Gencler are bottom of the Super Lig, they still have enough quality in their team to put a run together and came away with a good 1-1 draw against Top of the table Alanyaspor last weekend. Experienced midfielders Stephane Sessagnon and Daniel Candeias will be key to a positive outcome for Gencler on Sunday. Candeias is a wide player who works tirelessly for the team and has the quality to deliver for the likes of Sio, Ayite and Seuntjens in attack. Sessagnon despite being 35 years old is still an excellent player and the Ankaragucu defence will need to be at their best to contain him.

Ankaragucu are the home side on Sunday so will be hoping for a good turn out from the fans. The problem at the moment is a lot of fans are boycotting until Yiginer resigns but hopefully they can put their differences aside for the weekend and help cheer the team on to a positive outcome.
By Nady - September 26, 2019