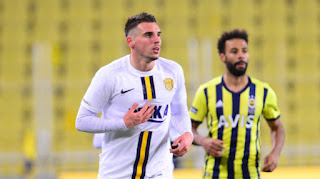 The familiar story of players not being paid their salary sadly returns to Ankaragucu as Zvonimir Sarlija becomes the first player to terminate his contract. Its believed 4-5 other players have also taken the decision as salary's haven't been paid for 5 months.

Sarlija is reported to have been paid only 20K of his 360K Salary and is now free to sign with other clubs with Ankaragucu still having to pay his outstanding salary. Sarlija signed for the club in the summer for 300K and is one of very few players who the club could have commanded a fee. Unfortunately as so often the case, the club will now receive nothing and Sarlija becomes a very expensive signing for a club who was relegated.

The other players who refused to play in the weekends game are unnamed at this stage but believed to be both Turkish and Foreign. Looking at the team line up Endri, Alper, and Ibrahim could be among those players.

Hikmet Karaman took a pop at an incident that happened 5 weeks ago but wouldn't say what the said incident was, he believes this was the reason the club were relegated. Its also believed he has had a fall out with Thiago Pinto as he kept him on the bench against Alanya despite having no recognised left back to chose.

Karaman himself has come in for criticism for taking so long to play Man of the Match Mert Topuz and insisting on Freidrich and Korcan who both continued to perform badly all season. He also failed to play any other youth players at the weekend and instead gave opportunities to failures such as Assane, Orkan, Saba, Sahverdi who have no futures with the club.

The clubs elections will take place later this month as Fatih Mert has stepped down and it looks like Faruk Koca will be a candidate and potentially Mehmet Yiginer.

Neither candidate is good new for Ankaragucu. I have no doubt both have the right intentions, but they have proven they dont know how to run a football club.

Emre Gural has also announced on his Instagram that he has left the club as his contract wont be renewed.