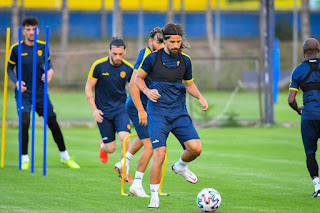 According to Yurtspor Ankaragucu have agreed deals with Erdem Ozgenc from Tuzlaspor, Ali Akin and Yusuf Abdioglu from Hatayspor, Cem Ekinci from Keciorengucu and Ishak Camak from Bandirmaspor. The club have also been reported to have agreed deals with  Owusu Kwabena from Qarabag and are in talks with Moryke Fofana from Yeni Malatyaspor.

Fofana in particular could be a good signing for Lig 1, he is a player i have always liked especially with Konya for his flair and skill. Hopefully he can add better numbers dropping down a division.

From the existing squad, Thiago Pinto, Stelios Kitsiou, Daniel Lukasik, Endri Cekici and Torger Borven will all stay with the club unless they receive acceptable bids from other clubs. Amongst the Turkish players Alper Potuk, Ibrahim Akdag, Atakan Cankaya, Sahverdi Cetin, Embiya, Ali Kaan Alperen and Berke will all remain too unless suitable bids come in.

On top of the players who left a few weeks ago Idriz Voca has agreed to mutual termination and will now be free to find another club. The club are trying to make final arrangements to pay former players Moke, Scarione and Canteros before unveiling the new signings.

Some news in the last hour, Faruk Koca has stated both he and Mustafa Dalci want Torgeir Borven to stay but the player wasn't to play in the Super Lig and they cant force him to play. Atakan Cankaya is also set to move on as he has offers both in Turkey and abroad.

Ibrahim Akdag will pay his release clause and is set to leave the club in the next couple of days. He also confirmed Kitsiou and Endri are both staying at the club. Owusu Kwabena is coming to Ankara tomorrow to sign a 3 year deal on a free transfer.

The club have met with Hugo Rodallega but have yet to decide if they want to proceed and sign the veteran Colombian.

And finally, Faruk Koca wants to make the 19 Mayis Stadium the ground for Ankaragucu with Genclerbirligi taking Eryaman. We will await and see how much of the above is true.