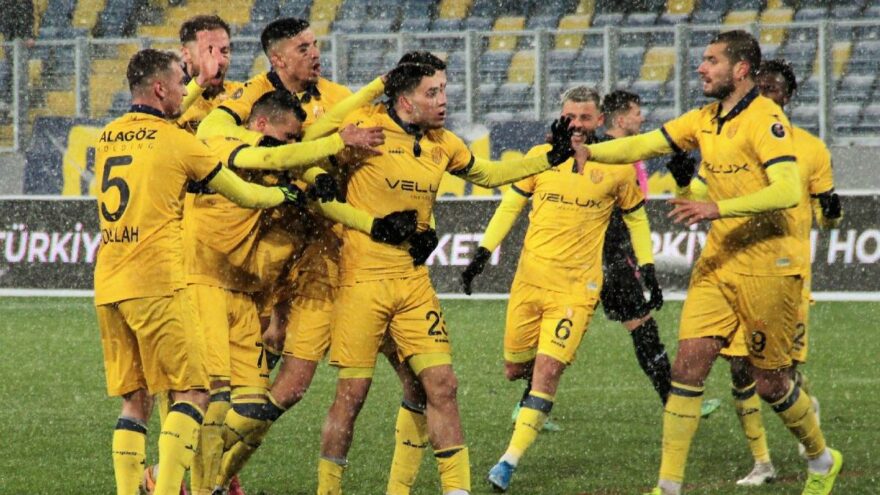 Ankaragücü left it late again with another injury time winner this time against Denizlispor as they go one step closer to promotion. The team had to do without Zahid, Pinto, Erdem and Aatif due to injury and COVID which makes the 3 points even more important.

The conditions in Ankara was heavy snow but the grounds staff done a great job making sure the pitch was in playable but difficult conditions for the players.

The first chance of the match came for Ankaragücü after 4 minutes when Sahverdi shot from the edge of the box and his shot was deflected into the side netting. Minutes later Ankaragücü should have had a penalty when Cem saw his header handled in the box but the referee missed it much to the anger of the Ankaragücü players.

Yasin almost got lucky with a cross on the 20th minute but the ball went just over the bar. One minute later Yasin was the hero with an incredible recovery block as Ilhan was through on goal and took the ball round Akin, he had an empty net but Yasin used his speed and determination to get back and clear the ball.

Yusuf had a chance just before half time but he headed his shot well wide of the post and both teams went in at the break level.

Ten minutes into the second half Omer almost gave Denizlispor the lead but for a good save from Akin.

Two minutes later and Ankaragücü took the lead. Ali Kaan saw his first effort cleared off the line, the ball came back out and found its way to Ali Kaan who placed a beautiful shot into the top corner and make it 1-0.

Denizlispor were level 10 minutes later when Oguz headed the visitors level after poor defending from Sinan and Yusuf.

Ariyibi had a shot from distance saved by Abdulkadir in the Denizlispor goal as Ankaragücü pushed forward looking for the winner.

The winning goal came in injury time with a Hasan cross into the box for Yusuf who headed past Abdulkadir and give Ankaragücü the important 3 points.

I have to give credit to Yasin Gurler this week. Last week I said he was one of the worst football players I’ve seen. This week he was outstanding at both ends of the pitch and hopefully it gives him confidence to go and deliver these kind of performances every week and challenge Pinto for the LB position.