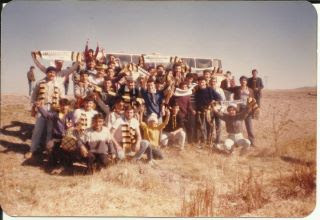 Ankaragucu host Fenerbahce on Friday night at the 19 Mayis Stadium in Ankara where there could be more away fans than home fans.

Ankaragucu have lifted the 5% quota on away fans meaning that Fenerbahce fans will now be able to buy tickets for Maraton and Behind the goal. The last couple of home games Ankaragucu have been playing in front of about 6,000 fans where as at the start of the season there were 19,000 fans turning up.

Fans will blame weather and kick off times for not turning up, but the weather is the same for everyone, so if the Gecekondu and Kanka Group can turn up every week why cant the rest of the fans ? Anti X are protesting at the moment against Cemal Aydin by staying away from the matches, who is this really hurting though ? Does Cemal Aydin rally care who turns up ? The answer is no he doesn't, the club need the fans more than ever and its time the fan groups stuck together instead of going against each other.

Ankaragucu today also confirmed that 12 board members who were appointed by Haluk Ilcak have left the club today. Genclerbirligi president Ilhan Cavcav also paid the clubs electricity bill of 36,000 TL. Why is it been left to another clubs President to pay it ? Where is Mr Illyas ? Melih Gokcek also said the only way to save Ankaragucu is to take there name and replace the name of Ankaraspor. You can stick your idea Melih !

Anyway onto the game itself, Fenerbahce go into the game after a stunning 6-1 win over Genlcer at the weekend. They now have the firepower in Miroslav Stock, Issair Dia, Semih Senturk, Alex and Moussa Sow to punish teams. Miroslaw has been one of the stars of the Turkish Super Lig this season.

The last time the two sides met Fenerbahce won 4-2 with Miroslaw Stoch winning the game for the home side. Ankaragucu fought hard and were unlucky not to take something from the game having scored through Murat Duruer and Ergin Keles. So much has changed since then with Ankaragucu loosing a host of players, from the team that started that night only Atilla Aybars and Ishak Dogan are left.

Ankaragucu lost 5-2 to Eskisehirspor at the weekend and will need to learn from there defensive mistakes. There has been improvement in the side but as so often with young players, they lack much needed experience.

Fenerbahce should win this one comfortably. They need to keep winning to keep up with Galatasaray who are starting to run away with the lead. Ankaragucu will be hoping to cause a huge upset though. Can it be done ?
By Nady - March 07, 2012