Thanks to Bellshill Kanka aka @AnkaragucuPitch on Twitter, I came across a Hurriyet Daily News article on Ankaragucu.

Have a read of it and then come back.

First up, I have to applaud the Hurriyet Daily News for actually publishing an article not based on one of the Istanbul teams; but then I cannot this this go without having a swipe.

In the first paragraph of his Istanbul-datelined piece Çetin Cem Yilmaz writes that "few people are feeling sorry for the club that once avoided relagation with the order of a junta leader."

I'm not going to have a go at the spelling mistake, especially as Spine and me used to work at the old version of the paper many years ago and we let many howlers through, but how is it that the club once "avoided relegation with the order of a junta leader"? The fact is that they got promotion, not relegation, and not through an order from a junta leader, but through a rule change from the then version of the TFF (although it is true Kenan Evren said out loud at one stage that he thought an Ankara team should be in the top flight - the then equivalent of the TFF did the rest - more on that later).

Let's have a look at the first part of the sentence: "few people are feeling sorry for the club"

Ugh? Were does this come from? It has been stated again and again in the papers and during the radio broadcasts that I've listened to that at Ankaragucu's away games fans have expressed sympathy for the team's flight. Even us Genclerbirligi fans have supported the club at despite some of the provocations of a small minority of Ankaragucu fans.

I'll admit though, I doubt that many Besiktas fans give a damn. What team do you support Çetin Cem Yilmaz?

The article continues with a review of Ankaragucu's recent on the field failures. No controversy there, but then come a couple of paragraphs that I failed to completely understand.

If not for their famously, or infamously, rowdy fans, not many people felt sorry for Ankaragücü – even through their bitter story – because the team’s recent history has been marred by politics.

In May 1981, Ankaragücü was awarded promotion after an order by then Chief of General Staff Kenan Evren, who took power through the Sept. 12, 1980, coup. Evren said a team from the republic’s capital city, Ankara, should play in the top-flight, and Ankaragücü was promoted with a sleight of hand – a rule change that a lower-tier side should be promoted to the first division if it wins the domestic cup was enough. 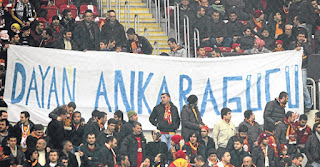 These Galatasaray fans seem to have forgotten recent history
But I'll give him the benefit of the doubt and assume that Mr. Yilmaz is referring to his next paragraph and the "recent" events of 31 (thirty-one) years ago concerning Kenan Evren.

Looking at that paragraph I'd like to ask Mr. Yilmaz to actually show us the "order" he says came from Kenan Evren. Was it ever given? We all live in Turkey and we know that these sorts of orders are never given. Suggestions are made and these suggestions are acted upon. The difference is not great, but to say that an actual order was given, as you have in your article, is simply not true. A great paper such as the Hurriyet Daily News should be able to make this distinction clear for its readers. The paper makes these subtle distinctions in its political coverage, why not here?

By the way, I have blogged before about how Boluspor believe they should have won the domestic cup referred to in Mr. Yilmaz's piece.

Anyway, we now continue into proper recent history, and the way that control of Ankaragucu has changed hands. With any history of the recent events of Ankaragucu we have to look at Ankaraspor. Mr Yilmaz writes:

The team’s recent years saw a political power struggle as well, when Ankara Mayor Melih Gökçek took over the club in gradual fashion. The former chairman of Ankaraspor, the team funded by the municipality, Gökçek stepped down from duty after a rule change that mayors could not actively work at football clubs and was voted the “honorary president.”

Careful there Mr. Yilmaz! Saying that Ankaraspor was "funded by the municipality" could well be libellous! It is illegal for municipalities to fund professional football teams and there are court cases happening right now (although they are extremely slow) where the the municipality is accused of sending funds to Ankaraspor. Mr. Gokcek, of course, denies it. I hope he doesn't read your piece because if he does the Hurriyet Daily News could be up for a big legal bill. I hope you've got insurance mate!

Mr. Yilmaz then talks about how Ahmet Gokcek won the congress at Ankaragucu and took over the club and then we get this paragraph:

Former Ankaragücü Chairman Cemal Aydın’s camp, meanwhile, applied to court for the cancelation of the general congress which Ahmet Gökçek won, and eventually was successful. Wealthy Gökçek eventually got his hands off the club, leaving the club in a dire and cash-strapped position, which left it as it is now.

Errr. Why is the club cash-strapped, Mr Yilmaz? Why are they a dire position? At no stage in your article do you actually explain anything. I'm not denying that the club is in dire straights but it would have been nice for you to actually expand on your statement. For help in the future you might like to look at this article we wrote just a few weeks ago.

We are now coming to the end of Mr. Yilmaz's piece. I'll quote it in full.

Right now, Ankaragücü is not an attraction for potential presidential candidates and might bounce back when it is relegated. But be warned, there might be even more drama coming this way: The newly-elected TFF Chairman Yıldırım Demirören mulls a plan to cancel the relegation for this year as the daily Hürriyet reported yesterday, and Ankaraspor is returning to the league as a result of a court ruling which decided the TFFdid a wrongdoing in demoting the team.

If things turn out that way, the Ankaragücü followers will be all the more lonely in their cause.

Just read the last sentence again. I have no idea what it means.

Dear Mr. Yilmaz,
Unfortunately on the Hurriyet Daily News website there is a 250 letter limit to any reader comments.
This comment on your piece is obviously more than 250 letters. I'd love it if you would add your comments here.
Yours,
Oz Kanka

I have e-mailed Mr. Yilmaz a link to this post. Somehow I doubt he will respond. EDIT: I got that wrong as he has responded, see comments below.
By Oz Kanka - March 02, 2012