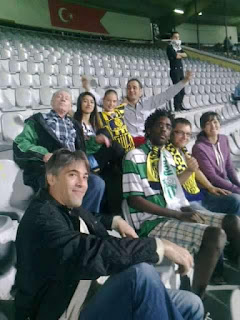 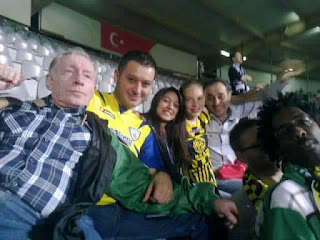 It was a sight to behold last night and as if Ankaragucu had just won the Turkish Cup.   It wasn't just that Ankaragucu had won their first point of the season, it was the performance of the whole team.   The Stadium applauded as one at the final whistle and demanded a lap of honour with Coach Yilmaz Ozlem leading it.

Quite clearly the best performance by an Ankaragucu team that I've seen since they won the TRT Cup in August 2011.

A good turn-out of kankas last night as we met in The Chopin Bar.   Maniac Kanka and daughter Guzel Kankie Hazal, Muco Kanka and daughter Anastasiya, Battle Damaged Kanka Damon, Cider Kanka John and friend Lila from the USA, Yann from France attending his first and last match (he leaves for Paris today) and yours truly.

Like last week in Izmir, the attendance and noise volume would do justice to any Super League match.   Gecikondu was three quarters full and in full voice as usual, Maraton was about half full, Right Kapali was half full and the 'away' end had 15 brave souls !

Ankaragucu started the match tentatively and were lucky not to go one down in the 3rd minute when the Manisa No9 blasted over when it would have been easier to side-foot the ball into the corner.

After that scare, the match settled into a game of cat and mouse with both teams moving the ball around and it was pleasing to see Ankaragucu in attacking mode and making some nice probing moves in the Manisa half and not just their own half as has been the case earlier in the season.

Then on the 16th Minute, just after the customary 'Bursa Song', Ankaragucu almost went ahead.   A cross came in from the left and the header for goal hit the post with Manisa's goalkeeper, Volkan well beaten.

Volkan thwarted a goal bound shot on the 35th minute, but from his clearance Manisa went on a fast breakaway and their striker fired in a great shot which rebounded off the bar (I could hear the 'thud' up in Maraton !).   Unfortunately, the rebound fell into the path of the inrushing Bulent who bundled the ball into the net with himself and the Ankaragucu goalkeeper, Gokhan, following the ball in to land in a heap together.

A sickener, but Ankaragucu responded well by staying in attack mode and the match was being played a a terrific pace.

Then, 2 minutes before half time came the equaliser.   An Ankaragucu attacker crossed the ball from the left, but the inrushing defender, Fuchs, in attempting the tackle made contact with the ball with his hand and the referee pointed to the spot.   We were all up on our feet in anticipation and Mert Erdogan made no mistake, despatching the ball to the right corner for a well taken penalty.

So, honours even at half time and on reflection a fair result.   However, the main talking point among the kankas at half time was the performance of the team.   One of my observations was that Yilmaz has the team well organised at Ankaragucu corners, leaving a few defenders further back to guard against the breakaway. How many goals did Ankaragucu concede from that situation last season ??!!

Into the 2nd half and it was mainly all Ankaragucu.   Shot after shot came in on Volkan but he either pulled off some great saves or the ball went whizzing past or over.   That a goal didn't materialise was down to him and his back four who were the reason Manisa escaped from Ankara with a point !

There were too many near-things in the 2nd half to mention, but the one that stands out was in the dying seconds of the match when a free kick was awarded to Ankaragucu about 25 yards out.   It was a fantastic shot by Bilal over the wall and heading into the goal just under the crossbar but somehow Volkan got his fingertips to it and tipped it over for a corner.   It would have been a candidate for goal of the season if it had gone in !

So, what now ?   Press on up the league is what Yilmaz has called for.   He wants a top 6 finish.   On this performance that's not pie-in-the-sky but a real possibility.   The players can be proud of their performance last night and their confidence should be enough to go to Urfa next Sunday and get a result.    However, firstly there is the Cup match against Igdir on Wednesday which will be played in Ankara and probably in the  afternoon.   Details here when known for sure.

By the way, no disciplinary problems at the match which were observed by us, so Bellshill Kanka Nadeem's visit to Ankara for the Kartal match on 6 October should be a GO-ER.   Remember, we are meeting him in the Beer Station in Tunali on Friday 5 October 7-8 pm and then going to the Beyzade Restaurant.