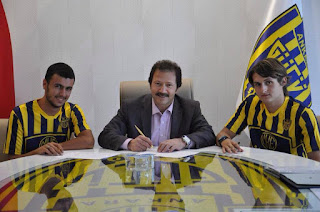 Ankaragucu received a major boost as Gokhan Erdogan and Teoman Sefa Erkan both agreed new contracts with the club. Gokhan signs a new 2 year contract and will look to build on his good campaign last season. A player with lightening pace and who scored some important goals will hope his brother Mert follows suit and also signs a new contract. Mert along with Timur and Bayram are believed to have held positive talks with the Management team.

Teoman broke into the team towards the end of the season and will be looking for a big improvement with his goals this season. Missed to many good chances last season but has the talent and just needs to find his confidence. Ankaraspor are still hoping to sign Mert much to the displeasure of Mehmet Yiginer who is hoping he will stay at the club as mentioned above.